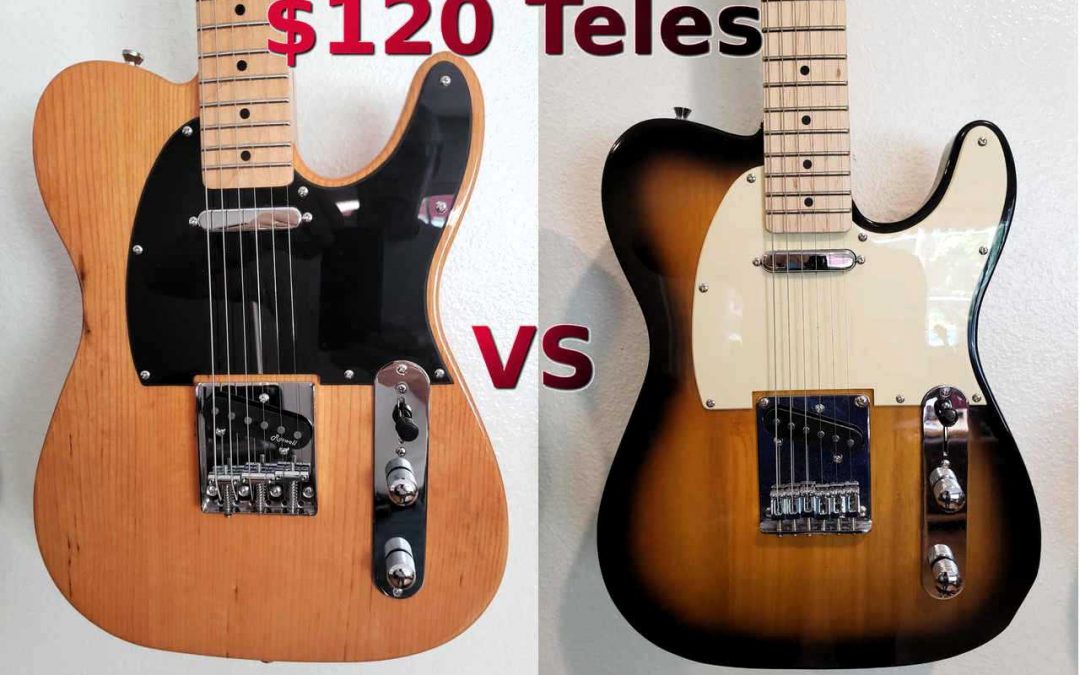 Let’s compare the two cheapest “viable” Telecaster guitars against Fender’s standard. If you have other ideas about the cheapest viable Teles, please let us know in the comments.

The Sawtooth Telecaster is selling on Amazon for $120 with gig bag & strap and free shipping. The Harley Benton sells for $118, including shipping from Germany.

I’m going to split this article into two sections – one with the opinions of an experienced guitar player, and friend, Rob. The second section will be from the perspective of a guitar tech (me).

The first thing we both noticed was the weight difference. If playing outdoors, you might want to tie the Sawtooth down in case of a breeze! The Benton, however, was heavier than some boat anchors I’ve used!

Rob was surprised at the playability and sound of the Sawtooth and said it was certainly gigable, but the neck, though slim, didn’t feel fast and the tuners felt a bit cheap.

On the other hand, based on weight and appearance, he seemed to expect that the Harley was better quality and nothing about the HB disappointed.

After playing each, Rob swore he’d sooner have the Harley Benton than either of the other two!

Disclaimer –  Even brand-new $600 guitars are likely to not play well until they’ve been properly setup by a competent guitar technician.  You cannot expect any guitar to really play right without a decent setup including intonation.

Having said that, it is not unrealistic to expect a sub-$200 guitar to play well and even be gigable with the proper attention of a competent guitar tech.

Give me a day or two to go through each of these guitars and I’ll add my thoughts.  But I can already say that IMHO, the Sawtooth is not holding tuning well and is difficult, if not impossible to properly intonate (haven’t worked at it much yet, so this may change).  The Fender, on the other hand, I setup a couple months ago and is still in tune.  Will the Harley suffer these same issues?  Stay tuned and we’ll find out!

Sorry to say that the Sawtooth Telecaster got away!  I easily steered the first customer who came to Palm Harbor buy it, toward a better instrument, (I forget if it was a Squier or Starcaster), but the second fellow was determined to take the Sawtooth home.

The Harley Benton did not escape so easily, though it probably wishes it could have (if guitars could wish!).  It came with a sloppily cut, plastic nut, which the customer wanted replaced with bone.

The first thing you’ll realize when you pick up this guitar, is how heavy the body is. This is the most unbalanced guitar I’ve ever played!

A knowledgeable player, this customer understood that new guitars need an immediate setup, and that’s the main reason it found its way into my hands.

This nut appears to have been cut with a dull tool from the factory, which would have added friction and made it difficult to keep the guitar in tune.

The vintage 3 saddle configuration didn’t allow for compensation, which would make intonation difficult, so those had to be changed.

What it shouldn’t have needed was fret leveling.  Yet, I found 8 frets that were either high pretty much from E to e or high at the b-e end.  One was high at the E (low) end.

Since the fret problems didn’t begin until the 8th fret and since my customer said that is foreign territory to him and will likely remain so – he decided to just let it be.

You should budget $50 for a setup for any new guitar you buy, but having to spend another $40 or more for fret leveling (My Palm Harbor guitar tech fees:  Setup: $50, Setup + Fret Level & Crown: $90), should make you stop and think about just buying a better guitar.

Now to be fair, about 5% of the Fender guitars I work on need fret leveling that is apparently due to factory issues.  Harley Bentons may have about the same percentage and maybe I just got that one guitar in twenty.  But going from what I’m seeing, HB’s are one-for-one, and that makes me cautious!

Needless to say, the fret ends are sharp, but so are all Squiers and Starcasters in the sub-$300 neighborhood.

No dime-size pots like you find in most sub-$300 guitars. And the Kluson-like vintage tuners felt like top-quality tuners. The overall good quality of the Harley’s components, make it even more disappointing that there was so much trouble with the frets.

But if I want to get nit-picking, several of the solder joints were dull, yet got by their QC process. To be fair, I’ve seen 40 year old guitars that played great with dull solder joints that appeared to have been done at the factory.

I intend to check out more HB’s, even if I have to buy a few new ones.  With frets properly leveled & dressed, bone nut and a good setup – these should easily be worth over $200. But how much more? You can buy a Squier standard model for $250-$300 new, and, IMHO, have a better instrument.

Remember, every guitar I sell has had all frets checked and leveled, if necessary, nut slots cut to specs, professional setup, thoroughly checked out, new strings, tuned and intonated.

I guarantee all electronics for one year and offer free adjustments for the first 30 days, so why take chances on a garage sale guitar?

For the best used guitar deals in Palm Harbor, Tampa, St Petersburg, check my “Used Guitars” web page or just give me a call.

Harley Benton guitars can be found on the Thomannmusic website.   I found Sawtooth guitars on Amazon.com