A Setup Is Not A Setup! 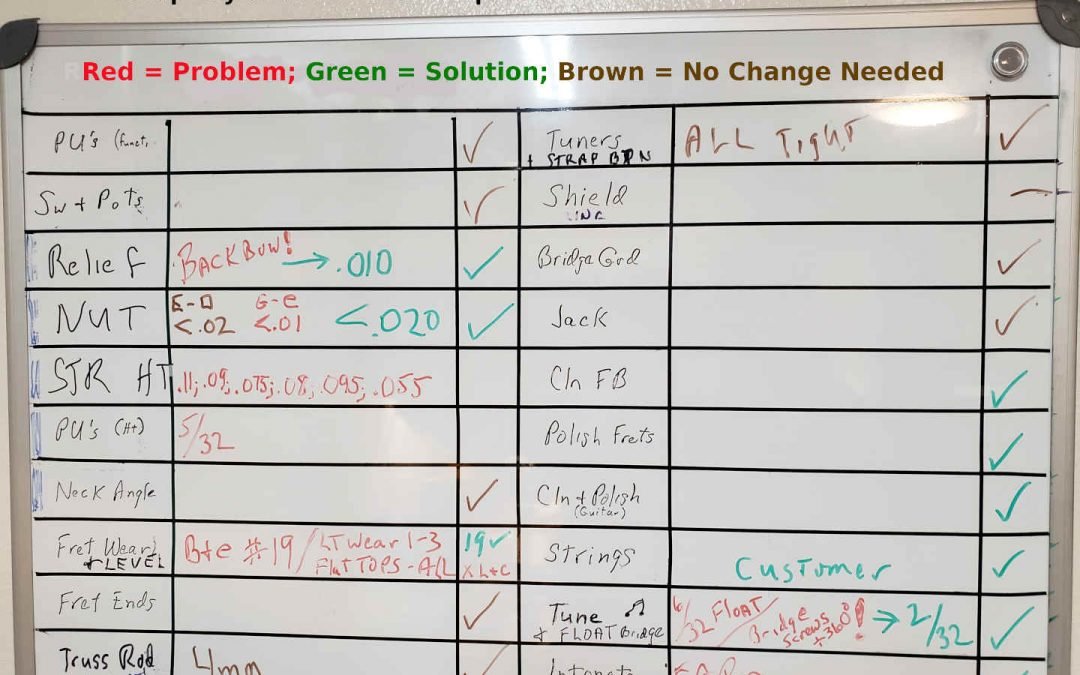 Yesterday, a customer brought me a guitar saying he’d just paid for a setup at another Tampa/St Pete area shop. When he got it back, it was worse than before, so he brought it back to them again and asked them to make it right. Long story short, he was told that was as good as it gets. No refund. No satisfaction.

Not all setups are the same. They don’t all include the same services and the guitar techs who’ll potentially be working on your guitar, don’t all have the same experience, know-how or dedication to quality – not by a long shot!

I was aware that not all shops in my area bothered with filing nut slots down to spec (they’re almost always high from the factory). And at least several don’t bother to check frets for levelness up and down the fretboard, unless the player mentions buzzing at a certain fret. Intonation is another step that’s often skipped.

And then, there is the “know-how” issue. I’ve heard stories of customers bringing a guitar into a shop for buzzing issues, and without measuring anything, the tech (seemingly randomly) starts twisting the truss rod this way or that – hands back the guitar and asks, “is that better?” !!!

The customer handed me the guitar, and after about a minute of looking it over (and taking a couple measurements), I told him that three nut slots were too low – the B string was nearly touching the first fret. The neck had a backbow from the truss rod being over adjusted. Also, string heights went from 0.10 to 0.055 with a sort of random “up-down” sequence.

(Please see the whiteboard that shows exact measurements and issues.)

It would have been more believable if he’d told me the guitar had been setup by a blind person who’d never held a guitar before, than that he’d just returned from a guitar shop where a supposedly experienced guitar tech had done the work!

I also had some minor issues with the work – the frets were dull and showing some corrosion; the fretboard was very dirty; the guitar, saddles, bridge, etc. had not been cleaned. When dirt and dust collect around saddles, they attract and retain moisture which causes corrosion – which is not good for tuning stability nor for the life of your guitar.

Frets should be polished to help delay fret wear. The smoother the frets, the less friction you have, therefore less fret wear. And fretboards should be cleaned..well, just because “eww”! And also because your fretboard will last longer when it’s periodically cleaned and conditioned.

I’m sure most guitar techs will get your guitar working better than before you’d brought it, and that this case is an extreme one. Yet, this was done at a well-known shop that was thought of as having a decent reputation. Since this is not the first time I’ve had their dissatisfied customers come to me, I felt it was time to speak out.

Your guitars do need periodic setups. They’ll play better and last longer. But when you bring your guitar to a shop – ask them, “What happens if I’m not satisfied with the service?” If you’re not comfortable with their answer, leave.

I always like to have customers play their guitar when they come to pick it up. Take all the time they need. If they notice any issues, I have my toolbox right there and take care of things. Customers don’t pay until they pick up their guitar and they’re satisfied.