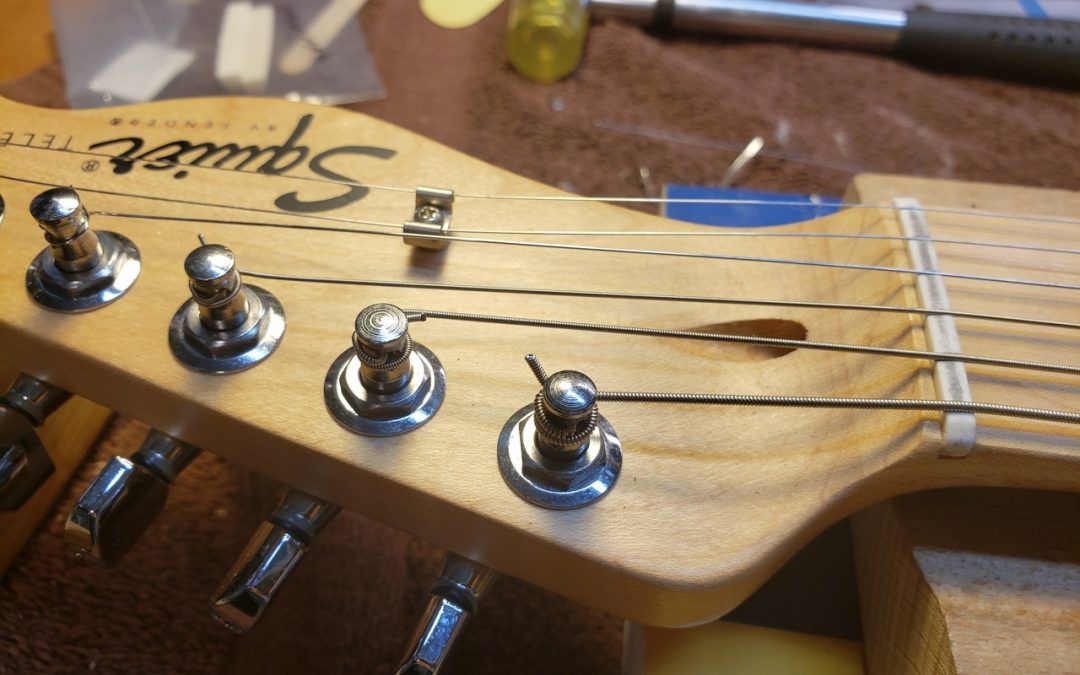 I got a customer’s guitar the other day, for a setup. Can you tell from this photo, one of the likely problems you’d encounter while playing this guitar?

No fair reading further until you study the photo!)

Well, here’s another “clue” – G sounded dull. Got it now?

That’s right – there is insufficient downward pull on ‘G’ – ‘D’ and ‘A’ too. We can fix ‘A’ just by winding the string onto the post properly with at least three windings working their way downward toward the bushing.

Tone was diminished on ‘A’ through ‘G’ but ‘G’ was especially dead.

Further inspection showed that these weren’t the only culprits in the “tone murders”! A cardboard shim had been placed under the nut, presumably to keep from having to replace it after slots were filed or worn too low.
But cardboard under a nut works like the springs in your car’s suspension system – good for your car, bad for your guitar!
To cut costs a bit for the customer, rather than remove the shim and replace the nut, I replaced the cardboard shim with an aluminum shim and was able to keep the nut.

But ‘G’ and ‘D’ should really get a second string guide. I have to chuckle sometimes at those people who spend good money for “nut grease” to help strings slide through an already smooth nut slot (it can’t hurt, if you don’t over do it and if you keep it clean, but IMHO, Chapstick works just as well!), yet they don’t give a second thought to the string guides that are wider than most nut slots and much less smooth.

For the minimal cost involved, my customer agreed that roller string guides were an excellent investment.

I was ready to remove the old strings (above pic was taken after the setup), when I got one more “shocker”..

I’m told there is a YouTube video somewhere out there that actually preaches this type of “Tone-icide”!

The purpose of the saddles is to give a clean, sudden break to the string and allow smooth, easy sliding as notes are fretted and strings are bent, etc.

By having the wrapped string ends at the saddle groove, you undermine both main purposes of the saddle. It no longer has that clean break where strings can vibrate cl early, nor can they easily slide along the saddles.

If changing strings is causing sweats, nightmares and procrastination, I charge only $20 for the service, which includes cleaning your fretboard, stretching and tuning. Add $6 for #9 or #10 strings (electric) unless you supply your own. String prices for bass and acoustics vary, so please bring your own or check with me first.