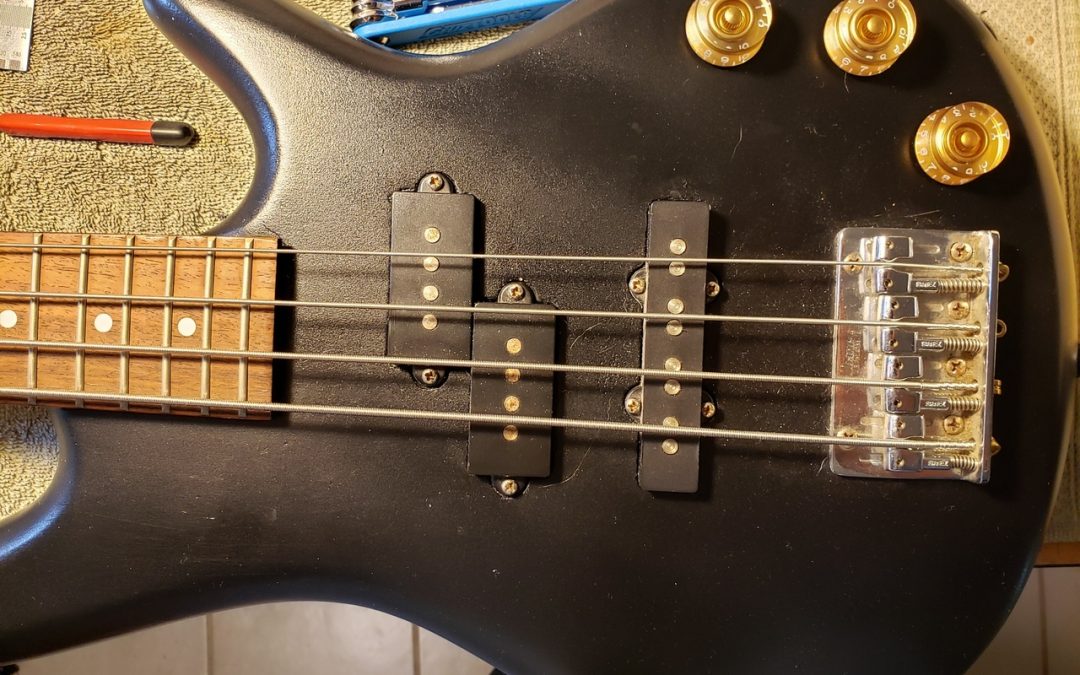 I bought this short scale bass guitar for a song and noticed the high action, but didn’t think much about it.  After all, what’s the big deal about a little twist of allen screws on the saddles – right?

When you see high action, ask yourself “Why?” – Don’t just figure it’s an easy adjustment!

Now, let’s look closer and see if we can figure out WHY the heights are so high..

Look closely at the photo to your right.  Does it tell you what the problem is?

See how low those saddles are?  That tells use that those adjustment (allen) screws aren’t going to be the solution!  Since the nut is only a couple hundredths of an inch high, that leaves just one suspect.  Do you know what it is?

Stop and think a bit before scrolling down..

Now you’re thinking, “Ah ha!  We need a neck shim.  OK.  But let’s not do it the bad, old fashion way with a strip of business card or other scrap that would go at one end of the neck pocket and leave a tiny gap under most of the foot of the neck.  Stewmac offers shims in varying degrees that will support the foot of the neck along its length.

Problem is – they’re a rather outrageous ten bucks apiece!  If you have a belt sander and PATIENCE, you can make your own.  I usually pay the ten bucks <sigh>.

As if that weren’t enough trouble for one little bass guitar, notice that the nut is offset toward the 6th string side.  Also, the strings were “grabbing” badly in the nut slots – which could drive a poor bass player batty.  (Though some might argue that “batty” is a prerequisite for playing bass!)

These were #50 strings and the nut seems to be made for #45’s.  Now where did they think that extra fifty thousandths of an inch was going to go?

Hey people, before you install those extra heavy strings, think about the fact that you’ll need your nut specially recut to accomodate them and a new setup too, otherwise things are not going to go well!

So I widened each slot just enough to allow the strings to move without “grabbing”.  A tiny dab of Chapstick in each slot helps lube things along and costs a tiny fraction of what “Nut Grease” or “Nut Sauce” would set you back.

Notice the E string tuning key is wound the wrong direction – and this came from a fellow who played a “real” (acoustic, huge, upright) bass for years!

After ultrasonically cleaning the bridge and saddles, I noticed that the ground wire had become deeply imbedded into the body so that it wasn’t making good contact with the bridge any longer.

A small square of aluminum foil under the bare wire end and moving it out of its groove resolved that issue.

Another problem was that most of the bridge screws wouldn’t tighten down – again due to the soft wood used for the body.  Gluing pieces of toothpicks in each hole gave the screws something to bite into and anchor the bridge to prevent tune creep and mystery buzzes.

Thankfully the truss rod nut looks pristine and I don’t expect any further problems.  (But then, it’s those “unexpected” problems that bite!)

So much for not expecting further problems!  The fret ends were sharp and needed dressing (filing).  When I plugged into an amp, noise was excessive and “static-y” sounds whenever I moved or shook the guitar.

There was no shielding in the control cavity, which made the foil under the cover useless except for “aesthetics”.   I resolved this by lining the cavity with foil, ensuring a connection with the foil on the underside of the cover and grounding them.

The two connections to the output jack were each hanging by only a couple of strands and another wire was badly pinched between a tone control and the body.

Two of the tuner keys were loose which could have led to tuning problems and mystery buzzes.

When I thought I’d finally finished, I plugged into an amp and discovered the “hum” was a bit less but still unacceptable.  My ohm meter showed just a little bit of resistance still between the bridge and ground.

I’d overlooked another bad connection – bridge ground wire connected by just a strand or two.  Once that was fixed, resistance went to zero and my hum was gone.

Now, how many problems was that?  And all in one little guitar that on first glance – by experienced eyes, seemed to only need some saddle and truss rod adjustments!

I shudder to think what would have happened if some well meaning parents had purchased this guitar for their son or daughter.  The poor kid would probably give up rather quickly due to all the problems the guitar had – and likely wouldn’t even realize it was the guitar’s fault!

The parents would have thought – “Kids just don’t apply themselves nowadays.”

If you enjoy following along on my little “Used Guitar Adventures”, please Subscribe.