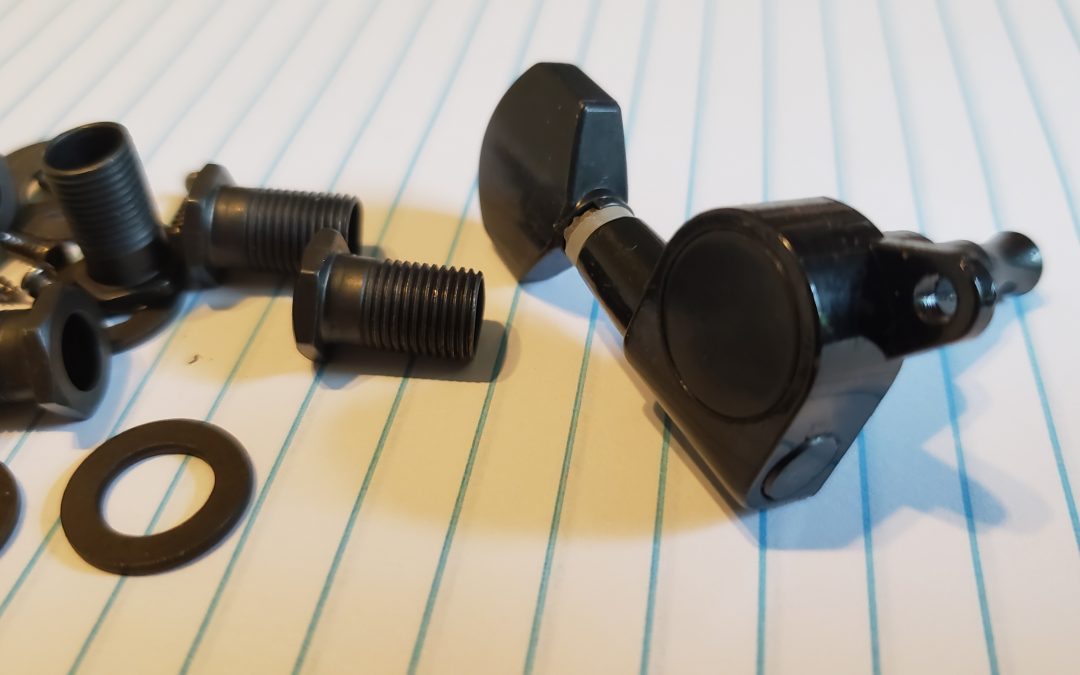 I’d just placed an order through Alibaba, after nearly exhausting communication attempts apparently with Chinese being translated into Greek before translating into English which often came out still “Greek”; then paying shipping fees sometimes higher than the product costs; then waiting six to eight weeks for delivery and hoping it all arrives ok.

But I needed a few loaded pickguards and locking tuner sets quickly, so I turned to eBay, where costs seemed even lower, shipping fees were lower, communication was unnecessary and shipping was much quicker.

The ads for these tuners clearly called them “Locking Tuners”, but the photos had them positioned so that you couldn’t see whether there was a locking knob.

When I used the eBay forms to complain, the sellers sent identically worded responses, each requesting photos and each signed with a western-sounding female first name.

The six loaded pickguards were poorly packed and came utterly smashed.  5-way switches bent flush against the pickguard, wire connections broken and pickguard finishes all heavily scratched by the screws protruding from the pickguard packed on top of it.

Almost forgot to mention the broken pickup mounting plates – most had the ears broken off where the screws thread to adjust the pickup height.

They were totally unusable, but after disassembling, I got lots of good parts of of the mess, so it wasn’t a total loss!

Oh, and the response message I got from the loaded pickguard seller – you guessed it – word for word the same as the others.

So, it would seem there is at least one seller out there (probably more) that has several seller accounts and preys on people by advertising one thing, then sending junk.  When their ratings get too bad (most people probably don’t bother rating or are afraid to leave a negative rating) they just open another seller account.

I’m sure there are some good deals out there, but do pay attention to ratings and longevity.  If you just need one part for your axe, it’s probably best to buy from a reputable outfit and pay more, knowing you’re going to be satisfied with your purchase.

After I responded to these sellers’ responses, I received another carbon-copy message from each of the three sellers – same message as the first.  It looks like there’s “nobody home” just an automated bot spewing out form letters blindly.

I tried to contact eBay to inform them, not to get a refund, since I’ve already started using these parts, but to save others from similar misfortune, but it seems there’s “nobody home” at eBay either and you just go round and round with their pre-written faq’s.

These matters didn’t justify spending more time, so I gave up like most of their victims probably do.