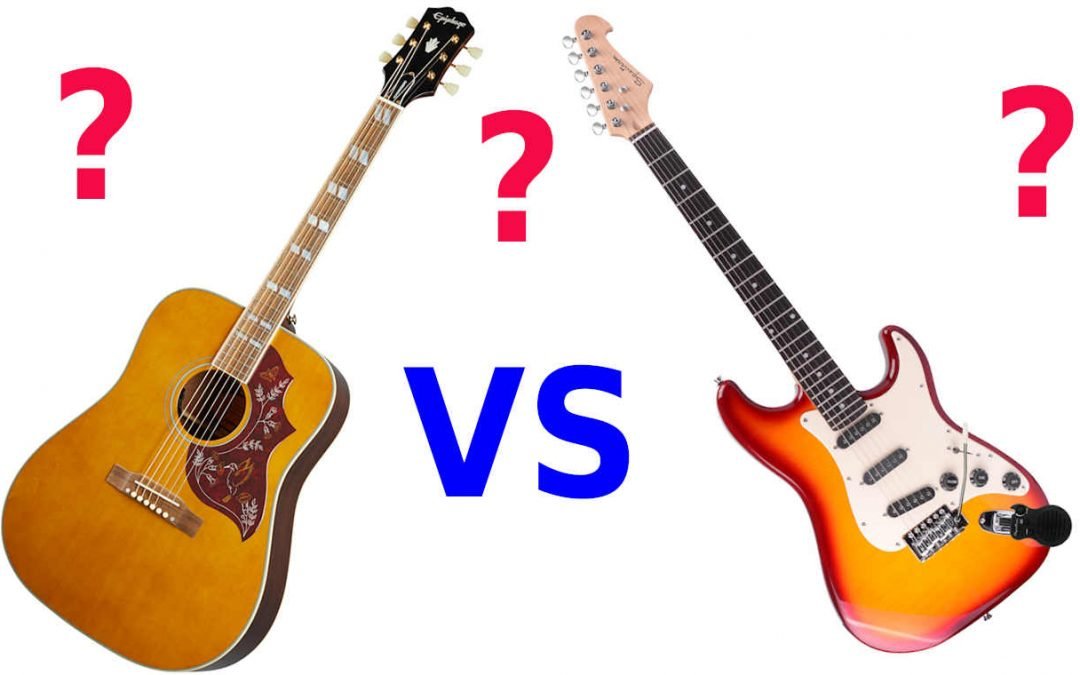 Several guitar instructors send their students to me to restring or setup their guitars. Apparently, music teachers prefer acoustic guitars for kids because I seem to get twice as many kid’s acoustic guitars as electrics.

But what bothers me is that I hear from nearly the same number of parents, months later, asking if I would buy the guitar – their child has given up trying to learn. I’m certain that the acoustic guitar is to blame in most cases, and I’ll explain why.

Let me start by taking as an example, an article from a website that seems to have mostly good information, but since the domain name is “theAcousticGuitarist.com” we can probably assume they are partial to acoustic guitars over electrics. Here’s the article link..

Under the subheading of “Electric or Acoustic?”, the first line is: “For children, I’d recommend starting on an acoustic guitar”.

I’ll argue against the bulleted reasons given , one by one –

Lighter in weight
OK. So what? I’ve never heard a complaint that a child couldn’t handle a child-size Strat because it was too heavy. Never. Why not mention the fact that those “lighter in weight” acoustics are also much more fragile; subject to damage from heat and humidity (we’re in Florida!); are more difficult to restring; require heavier strings; generally have greater string height and therefore require more finger strength – not to mention the extra pain in their finger tips!

Less equipment required
Oh – you mean an amplifier is required? A dependable practice amp can be purchased used from $29 and new from $49.

More available options in smaller sizes
Again, a non-issue. What options? Seven string guitars? Eight strings? Colors? Squier (a recognized fine maker of beginner guitars) makes child guitars in both 22.75 and 24″ scale lengths. The acoustic Yamaha FG Jr is 21.25″. Hardly enough difference to matter but Ibanez (another fine guitar maker) makes a “mikro” in a 22″ scale length. Now we’re down to debating fractions of an inch!

Less expensive
Again – BS! The Yamaha FG Jr – a popular acoustic guitar for kids, sells for $149.99 The Squier Mini sells for $220 with amplifier, gig bag and cable. But Monoprice sells a fine Indio Strat for just $130 with gig bag, strap, cable and amplifier! And used kid’s electric guitars with amplifier can be found for $100 and under.

After the bullet points, the author writes..

Do you remember being a kid? Excitement was everything! If you weren’t excited, it didn’t happen. Were you “excited” about cleaning your room? About eating your broccoli? About mowing the lawn? Those things likely didn’t happen without a lot of nagging – at least that’s how I remember it! 🙂

And it’s that way with guitar also. Look, it’s not easy to learn to play guitar. Harmonica is easier. Piano is easier. Bass guitar is easier. Six-string guitar ain’t so easy. If it isn’t “cool” and fun and exciting – it isn’t going to happen for long. And that’s how so many used kid’s guitars end up on the market.

What about this “better technique” stuff? No idea! Good habits and technique are important for guitar players whether they play electric or acoustic. I know of no technique that you can only learn on an acoustic guitar – but if there is one, it’s value to a beginner is nil.

If you want to be a classical guitarist and play on stage – fine. But you have to crawl before you walk and walk before you run.

If a child isn’t excited and having fun, they aren’t likely to stick with it for the long haul.

The author then follows with –

I’d like to know where the author finds these electric guitars that don’t play “bad” notes! I have dozens of electric guitars plus a few acoustics and they are all too accomplished at playing bad notes when in my hands!

Maybe the author has never seen nor heard an electric guitar. Maybe their ears are more sophisticated that a bat’s ears! I can’t believe anyone would put such nonsense in writing. Notes played on an electric guitar can be heard just as clearly as on an acoustic. Sure, you could set the amplifier to fuzz up the sound and add effects if you have that kind of amplifier. But then you could play an acoustic guitar next to a construction worker on a jackhammer and you wouldn’t hear those notes so clearly either. This is all so much nonsense!

And then there is the deal about strings. Why are guitar instructors insisting that parents buy the most expensive strings for their students? You’d think they were getting a commission! I had a customer today bring a child’s acoustic guitar and a pack of $16 Elixir strings for me to install. The kid’s set to have her second ever guitar lesson and has to have top of the line strings!

I once had an instructor tell me that he didn’t like students to have electric guitars because of the extra hassle of dealing with the amplfier and cable – bringing the gear from the car, then back again after the lesson.

You’d think the instructor would have a guitar amp and cable in his studio and not expect the student to bring their own. That way, the sound would be consistent and there would be no gear issues.

Here’s the thing about learning guitar – it requires a lot of practice. When parents get home from work and want to relax after supper, they probably don’t want to hear a beginner child practicing on ANY type of instrument. That eliminates a huge chunk of available practice time for the child trying to learn on an acoustic guitar.

But no problem for the child learning to play on an electric guitar! They can either plug their headphones into their guitar amp or unplug altogether. You can easily practice an electric guitar unplugged. I do it all the time. The player can hear what they’re playing, but anyone more than ten feet away probably can’t.

I’ve even practiced sitting right next to my wife while watching a movie. The TV sound drowned out my unplugged electric guitar entirely, but my fingers still got plenty of practice time in.

My apologies to Marty (the author of the article that got me riled up – I couldn’t find his last name) – I don’t mean to war with him, I appreciate that he’s put up a website to help people learn guitar and I know he’s written what he believes and he’s trying to do good. But I firmly believe that this article does more harm than good and spreads misinformation.

If a child truly wants an acoustic over an electric, then sure – acoustic it is! The child – in fact, any beginner guitarist, has to love their guitar and feel motivated if they’re going to stick with it. But head-to-head, the electric guitar beats out acoustic guitars for beginners and it’s no contest!