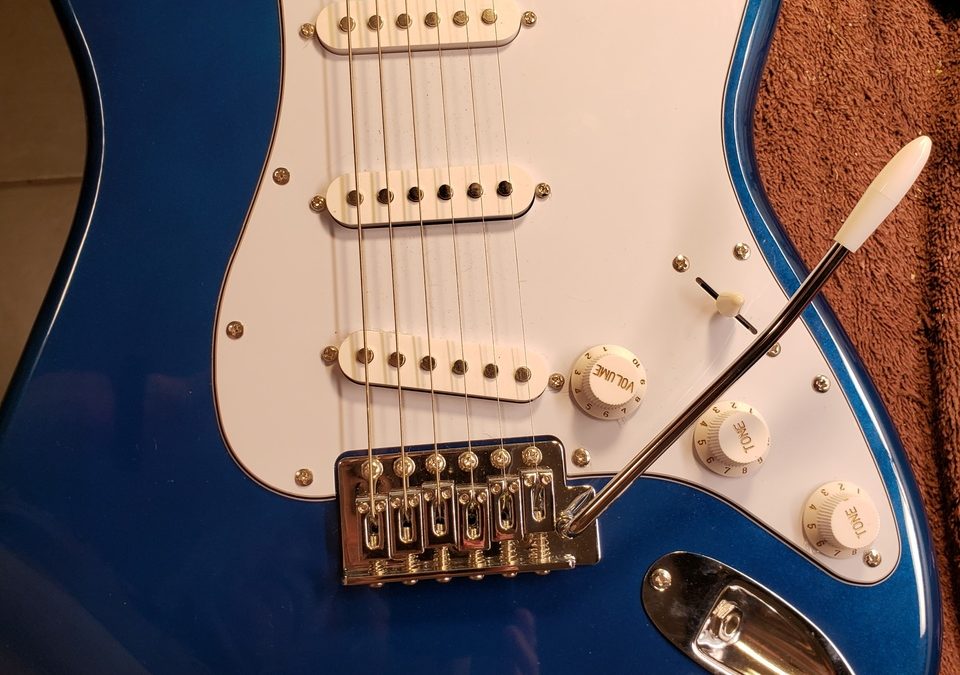 Another in my series of “adventures” in buying used guitars from sites like Craigslist, Marketplace, Letgo, etc. By reading these, you’ll be better prepared to avoid losing money on used guitars “lemons”!

The whiteboard photo shows (in red) all the problems with the guitar. The green shows that I’ve fixed those problems (look for the check marks) and blue pretty much means I did very little or there was no problem.

The photo in the ad would have made any guitar shopper stop and stare even if you weren’t shopping for a used Stratocaster guitar. The medium metallic blue color just leaped off the screen. The gloss finished headstock was the beautiful crown jewel. Like the ad said, this guitar looked “Like New!”

Though the fellow was in Oldsmar, he offered to meet at Walgreens at Hwy 19 and Alderman Rd in Palm Harbor and he was anxious to get the cash. I told him I couldn’t leave the house until after lunch but my house was closer to him than Walgreens and he was welcome to come by anytime after 10am.

Nope, he’d rather meet at a public place. Since he was a young guy and I’m over 70, I thought it was a little odd that he seemed to be concerned about security, but ok – we agreed to meet at McDonalds on East Lake Rd in Palm Harbor.

He seemed like a nice fellow – college student type and the guitar looked flawless. He assured me it was “like new” and that he’d basically never played it. I handed him the cash (his full asking price) and took it home.

I can just imagine someone spending their week’s or month’s worth of spending money, buying this guitar intending to become a “rock star”, plugging it in and getting nothing but very loud hum and static – cause that’s exactly what happened to me!

Yup, this guitar flat out didn’t work at all. Easy enough fix though – the ground wire had come loose from the jack and was shorting out. I fired up my soldering iron and that issue was laid to rest – but there were many more to come!

The nut slots were cut twice as high as they should have been, meaning that this guitar would never intonate. In other words, none of your fretted chords or notes would ever be in tune and the closer to the nut, the worse the problem would be. I used my nut file set and corrected that problem.

The neck relief (neck bow) was three times as much as it should have been, making it impossible to get nice, comfortable low action. I use my truss rod tool (Stewmac) to get the relief set to recommended setting (less than 0.01 inch).

The string height was half again higher than it should be, making the guitar very uncomfortable to play (high action). Adding to the discomfort, the fret ends were sharp enough to cut meat (i.e.: fingers). I fixed both of those issues.

All tuner nuts were very loose, the fretboard was filthy and the guitar needed a good cleaning. After that, I installed new D’Addario #9 strings, tuned, floated the tremolo bridge and set intonation. When I got the guitar, the bridge was being pulled flat against the body almost as though it were hardtailed.

Finally, it’s ready to go and worthy of the time you’ll invest in playing and practicing!

My hope is that this series will help you avoid problems when shopping for used guitars but if you want to guarantee a safe used guitar purchase, why not just buy from me? This beautiful Jay Turser Strat is just $99 and I prefer you actually come try the guitar out – take as long as you like, before buying.