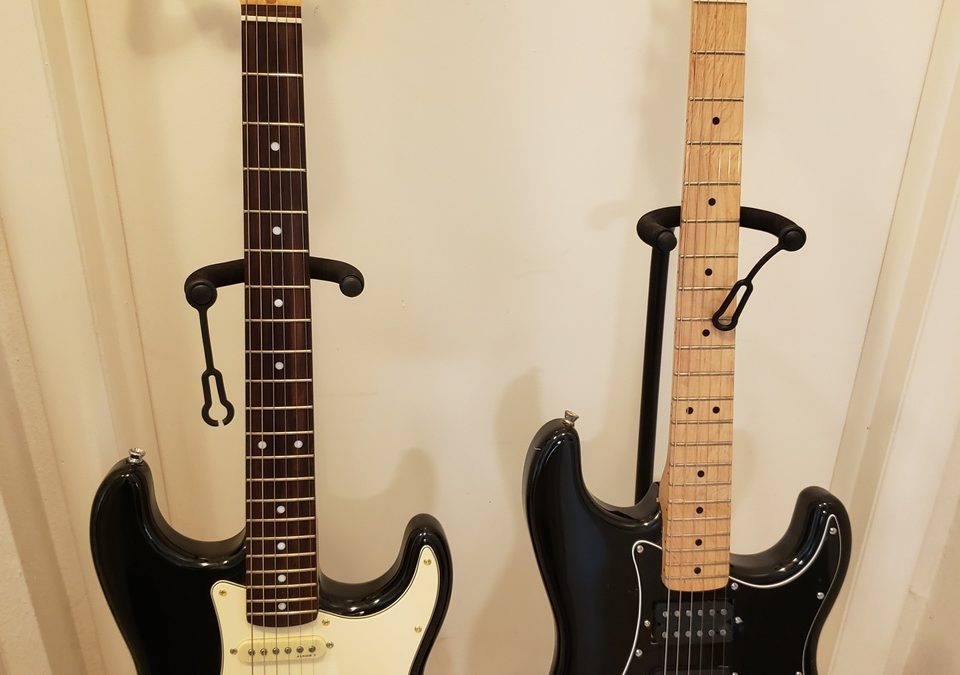 Google it – “Fender Squier vs Fender Starcaster”, and you’ll see that nearly every forum post rants about how great Squiers are over Starcasters – with just a lone post here and there that goes like, “Well, I don’t see any difference!”

The “featured image” for this article is two guitars that I just recently finished setting up – a Squier and a Starcaster. I upgraded both to have 7 pickup positions plus tone control for the bridge pickup – my new “Super Squier” series!

So why should my opinions hold any more weight than the thousands of people who’ve posted before?

While those people may have seen or maybe even owned one or two Squiers or Starcasters, I probably work on about 100 of them each year, roughly split 60-40 between Squiers and Starcasters.

Not many guitar techs are dumb enough to spend hours refurbing and setting up lowly Squiers and Starcasters, so there probably aren’t too many people with my experience in this area.

Since quality control has varied widely for Fender’s lower-priced models over the years and varied by factory, it wouldn’t be hard to find a particular Squier that seemed better quality then a particular Starcaster, and then with the next two guitars you pick up – you find just the opposite!

So, I’ll be forced to do some generalization, but I’ll also explain which areas are most important to check and how to check them.

This discussion will be meaningless if we fail to be specific on which models we’re comparing and what criteria we’ll compare them by.

So let’s compare kit models to Starcasters, since neither specifies a model.

By the way, if you haven’t seen the new line of “Fender Starcasters” yet, you should check them out..

I’ve always considered it a bit weird that these were called “Fender Starcasters” since all Starcasters are Fender. I really think they should call them Starcaster Thinlines or something.

For comparison, I’m choosing the Squier “kit” guitar. These are sold with amps, etc. and generally have no series or other model info on the headstock. This means they do not say “Bullet” or “Affinity” or “Standard”, etc.

But we shouldn’t just skip over the terms “Bullet”, “Affinity”, etc. without giving them some sense of definition.

Over the years, Fender’s plans for Squier models have changed greatly, and if you’re interested in Squier History, I recommend Tony Bacon’s book “Squier Electrics”.

A thumbnail, rough definition would be that Bullet is the barebones model. Often there seems to be less attention on finish and sharper fret ends.

At no time have I noticed any difference in electronics (pickups, potentiometers, switches) between Bullet and Affinity models. Tuner keys, saddles, bridges, etc. all vary so much that I hesitate to generalize and say that one model has cheaper appointments than another.

I’ll admit I haven’t done scientific tests between them, but visually, operationally and from a point of view of the guitar player – I’ve seen zero difference in electronics. They all have the dime-size pots and import-style switches. Pickups are indistinguishable.

Bullet models say “Bullet” on the headstock. By the way, Bullets are highly thought of by many great players!

Affinity Squires often tend to have nicer finish than Bullet – though you may have to look closely and compare – and sometimes I don’t see a difference at all. Affinity models say “Affinity” on the headstock – usually out by the top end.

All four models (Affinity, Bullet, Kit and Starcaster) usually have a thinner body than Mexican and American made Fender Strats. 1-1/2 vs 1-3/4 (note: either can vary by 1/8 inch).

Some Bullets are nicer than some Affinity’s. Some kit guitars seem nicer than others but all fall somewhere between the Bullet and Affinity lines.

Most Starcasters would easily be confused for Fender Squier “Kit” guitars if they just didn’t say “Starcaster” on the headstock. Except for the Starcasters with painted headstocks.

Painted headstock Starcasters than I’ve had, had the thicker Fender style bodies, smoother fret ends and would be difficult to distinguish from the Standard Squier guitars that out point Affinity models and cost another $50 more.

Tuner keys can vary among Starcasters and Squiers, but I can’t generalize and say that one model tends to have better keys than the other. Overall, I’ve had more issues with the “vintage” style tuners often found on the Squiers, than contemporary ones.

Nuts are plastic and tend to be cut higher than 20 to 30 thousandths over the first fret when fretted at the last on both models. (I measure this way, after setting relief, because it requires less accuracy and is more reliable than other methods).

Optimal setting is 0.10, but allowing for wear and considering that owners of inexpensive guitars aren’t likely to want to be replacing the nut every couple of years, I consider anything under 0.20 and above 0.06 to be ok.

What happens when the nut is cut higher than 0.10? You pull more string than you should when you fret notes or chords – especially up in the cowboy frets. This means these notes will not intonate properly – they will be too sharp.

This happens on Mexican Strats too (I don’t see enough American Strats to comment) and I don’t see any difference whatsoever between Squiers (you can include ALL models of Squier) and Starcaster in this regard.

This is one of the reasons ALL guitars need a setup – especially brand new ones – but the inexpensive models rarely get one.

Whether maple or dark wood, I have no complaints – except I’d like to see more finish on the maple boards. They can be difficult to keep clean without some clear coat.

Fret ends can be a bit sharp on all models. I don’t recall noticing any difference between models other than many Bullets seemed to have more of a problem with fret ends.

However, I’ve recently just setup and upgraded two guitars – a Squier and a Starcaster (top image) and I can say that with these two guitars, the Starcaster fret ends required less work than the Squier.

Unless the guitar has lots of fret wear, it’s rare that I have a problem with unlevel frets in Squiers or Starcasters – maybe one guitar in ten. I’ve found no distinction between the models in this area.

There is absolutely no quality difference between Squier pickups and Starcaster pickups. Period.

Someone on Quora posted that Starcasters used “cheap aluminum wire” in their pickup coils. I nearly spat my coffee out! Aluminum has 60% the conductivity of copper, 30% the weight and much less pliability – meaning that 42 gauge wire would be difficult to work with, likely making manufacturing more expensive.

They likely got this idea from WWII when copper was needed in huge quantities for the defense industry, driving up the cost, so contractors started using aluminum wiring in houses.

If you melted all the copper in a single coil pickup, I doubt you’d have enough to make more than three pennies. So, just how much could you save with aluminum? Also, aluminum is more susceptible to expansion and contraction with temperature changes and is more susceptible to corrosion – all things that would seem to make it a poor choice for pickup coils. I have yet to discover a single aluminum coil that I am aware of.

No doubt that these are inferior to Mexican Fender Strats. And why wouldn’t they be? But there is no generalized differences that I’ve ever seen between Starcaster and Squier bridge, saddles & trem block.

These parts (and all other parts) are perfectly interchangeable between Squiers and Starcasters.

Fender has made Squiers out of various types of wood – Alder, Basswood, Pine and who knows what! I can’t say that I’ve ever noticed a plywood Starcaster, but I suppose it’s possible.

It’s probably safe to assume that whatever wood Squier is being made of in any particular year, the same wood is used for Starcaster.

But one thing is even safer to say – the wood has no effect on your sound!

Unless you’re playing a hollow body or acoustic (and those are not part of this discussion), the wood makes no difference. Period.

Yes, you’ve heard Paul Reed Smith preach about “tonewood”. And yes, he was selling a solid body guitar at the time. But he’s a salesman and marketeer.

Those tiny electrons zooming through your pickups don’t even know your guitar body exists. Pickups are not microphones. They are transducers.

If a magnet won’t stick to the wood that makes your guitar body and if a tiny electric current can’t flow through it – then the wood has zero effect on the sound or tone emanating from your amplifier.

What have I left out? Strap buttons? Same. Trem springs? Same.

If you were blindfolded and given, one at a time, five Starcasters and five Squiers to play, you couldn’t beat the odds on guessing which is which.

You know what the real test is? I pay the same (taking condition into account) for Squiers as for Starcasters. I work on these things everyday and I play them every night. And I’m willing to put my reputation out there and say there is no overall difference between Squier (kit guitars) and Starcasters.

In fact, you’ll have difficulty finding generalized differences if you throw Bullets and Affinity’s into the mix.

There are several “crap” brands that I wouldn’t recommend. So I’ll start a list (probably add to it as my memory comes up with more) of cheap $200 (new) & under brands that I consider generally “ok” – as long as their frets are good and they’ve had a decent setup:

This list isn’t complete – but if any well-known brands aren’t here, there may be a reason. If it’s priced much above $200, it probably at least has the makings of a decent guitar once it’s gotten a proper setup.

Most Epiphones are great choices for adults (due to easy headstock breakage, I’m not keen on them for kids and teens), but I would avoid the Specials – I & II, and I’ve had a couple of cheap Behringer strats that couldn’t be properly intonated without moving the bridge, which is not a cost-effective option on this guitar, so I would avoid those also.