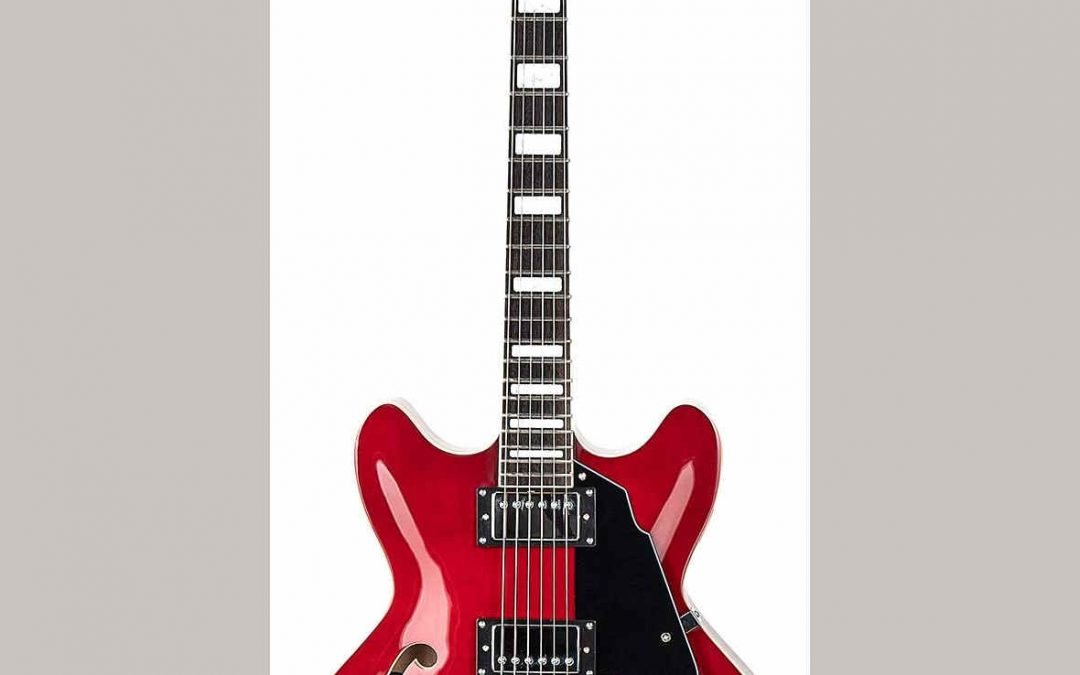 Who can resist beautiful guitars at inexpensive prices? In the sub $200 range, the Grote series is pretty tempting.

But is it as good as it looks? Let’s put the Grote 335 on the tech bench and have a closer look..

First thing I noticed, other than the guitar’s great looks, was the protruding screw heads at the tailpiece.

Yes, the screws were tightened all the way in. The problem was that the screwheads were made for countersunk holes.

Well, we wouldn’t want countersunk holes here because they would be weak from the thinner metal under the screwhead.

I replaced them with flathead screws, but you have to wonder at the lack of quality control that would allow this to happen.

My first step in checking out a guitar, is to measure all its current settings – relief, nut slot heights, saddle heights, etc. But before I can properly do that, I have to tune the guitar so I have the proper string tension working against the current truss rod adjustment.

The tuner keys felt cheap and didn’t seem to smoothly change tuning. In fact, the G string hung up on something until I heard a “zing” and it suddenly went from flat to sharp. I made a note to check closer, later.

All strings went real flat with a bit of stretching, although my client had been playing the guitar for awhile. it was nearly new, but not real new (months?). This told me that neither the store nor the customer had properly stretched the strings.

The E string was particularly bothersome and never seemed to be stretched enough to hold tuning. I discovered the reason for that as I removed the strings.

So the tailpiece channel for low-E is too narrow and it gets wedged-in prior to hitting the ledge where the ball should rest. This not only prevents stable tuning but creates one heck of a problem when you want to change strings. I had to remove the tailpiece and place it in a vise, then “persuade” the string to dislodge.

Before removing the strings, I tuned the guitar and took a few measurements:

Another interesting thing I noticed is that this was a 25.5 inch scale. Jazz guitars are generally 24.75 inch scale. The 11’s my customer wanted installed were going to have a bit of tension!

I removed the truss rod cover and used a 4mm allen wrench to adjust the truss rod. The nut was totally loose. About two quarter-turns and I had the relief where I wanted it.

Since my customer wanted it strung with elevens, my standard StewMac #10 nut files wouldn’t suffice. I’d have to use files from a nut file set for 12’s. B slot was pretty close at 0.025″ and ‘e’ was right on at 0.020″, but E through G were all 0.030″ and needed a good bit of filing, otherwise intonation would never be right and especially in the first five frets, notes would be sharp.

String height set itself once the relief was adjusted. They probably had it set correctly at the factory, but the neck bowed a bit since the strings were installed without a counter-balancing tension from the truss rod.

The worry about relief is not just that you’ll end up with buzzing and uncomfortable strings, but once the headstock begins to pull up, the strings have more and more leverage and relief increases even more rapidly. That’s why it’s important to have your guitars setup at least once a year, even if you don’t play them much, especially in the early years where the neck may be more pliable.

The pickup poles needed to be raised by 3/16ths of an inch. That’s a lot! To complicate matters, the high ‘e’ pole was held by just a tiny bit of wax and not engaging anything threaded!

I removed the pickup, and found that the pole would easily slide right through from top to bottom. So I pulled the pole up to the height I wanted, which brought the bottom of the pole flush with the bottom of the pickup. I injected a bit of thin CA glue, then glued a piece of popsicle stick over the bottom to keep the pole from dropping down in case the CA glue ever failed.

You’d be surprised at the number of toothpicks and popsicle sticks I go through each year! They really come in handy for guitar work.

Once the strings were removed, I checked each fret for level, from E to e and found eight high frets or parts of frets that needed dressing. The first five frets were fine. Maybe they take more care with these since this is the area most beginners play in (the “cowboy frets”). Playing anywhere higher on the fretboard would surely cause enough buzzing to make a chainsaw jealous!

By the way, I’ve seen “guitar techs” checking fret level by only using the fret rocker down the center of the frets (D & G area). They will only catch about ten percent of high fret problems using this method because most problem frets are high from about G to e or E to D. Rarely is a fret high from e to E.

Another fret-rocker misuse is that guitar techs press down too hard when using the fret-rocker. You need to use a light touch because a loose fret will just get pushed down and you won’t notice the problem – but the guitar player will notice it!

The 10mm nuts securing the tuner keys were loose, but then nearly every guitar you see with this style of tuner key will have loose nuts. I have little doubt that after several months of playing, they’ll be loose again.

If you overtighten them (and it doesn’t take much!), the threaded area below the headstock often breaks. I’ve broken a few! So it’s best just to snug them a bit and check every few months.

I taped over the pickup then cleaned the fretboard with naptha and #0000 steel wool; wiped off the naptha then went over the area with a strong magnet to get all those tiny bits of steel wool that want to attach themselves to your pickup poles and cause rusting.

Then I wiped on some “lemon oil”, let it set for about ten minutes, then buffed it out. Now, it was time to polish the guitar body and install the new strings.

Here, in Florida, I like to wipe a thin layer of 3-in-1 oil onto new strings in a motion where the oil is wiped on and off with different parts of the same clean rag. In my experience, this forestalls rust and corrosion dramatically.

On 3×3 guitars, I like to install E and e strings first, then A and B, and finally D and G, snugging each string a bit tight as I go along. Then I begin tuning. e String gets to about C4; B goes to about A; G tunes to F#; then the rest tune to pitch.

Then I set the intonation for each string by fretting at the 12th fret and making sure I’m within a cent or two of the open note tuning. Then I check the 3rd fret. Some guitars just won’t intonate accurately. In those cases, I’ll compromise between the 12th and 3rd frets and get things as close as they’ll possibly get.

I like to play the guitar afterward for maybe twenty minutes or so, then let it set for a couple of hours, or even overnight if possible. At this point, they’ll usually need another tuning.

Above, you see the whiteboard for this job. Blue shows the things I had to change; black shows what did not require changing.

As shipped, this guitar is not recommended for anyone who is not a competent guitar tech or at least willing to pay for one. Requires some specialized tools plus the ability to spot and correct guitar problems.

Since these Grote 335 guitars are mass-produced, we can probably assume that all of them will have problems similar to the ones I discovered –

To be fair, even a $1,000 brand-new guitar should be professionally setup before you even attempt to play it (after purchasing). But a “guitar-setup” isn’t guaranteed to catch and correct all these problems. As I wrote in a previous article, not all guitar setups are the same – or even close!

In our area, there is a brick-and-mortar guitar shop advertising guitar setups for just $30. Trouble is, they don’t specify just what constitutes their “guitar setup”. And that’s a problem.

I’ve had several of their customers bring their guitars to me after getting one of these “setups”, complaining about various things. Thankfully, it seems all they do is change string height and relief, so it was easy to correct and then give the guitars a “real setup”.

I can assure you that no brick-and-mortar guitar repair shop is going to be willing to do all the work I did on this Grote 335 guitar, for just thirty bucks! There is no way they could pay the rent and electric bills, but you probably can find other competent guitar techs who will properly set these up for between fifty and a hundred dollars.

I charge sixty dollars for a complete setup, so that puts this customer’s outlay at about $240.

You can buy a beautiful Squier or Starcaster (almost) 335 style guitar for $299, or spend a hundred more for their Classic Vibe series, and you’re not likely to have the high fret problems nor have a cheap, falling-apart pickup. Though nut slots may still be in the 0.025″ to 0.030″ range and string height will likely need some adjusting. There is a good chance that even the less-expensive Squier won’t need the relief adjusted.

In short, spend nearly twice as much and you get a nice 335-style guitar that may actually be playable, out of the box, but could still benefit greatly from a setup, but maybe a thirty dollar setup would be enough.

Or forego the 335 style and go for a simple Telecaster or Strat, where for the price of this Grote guitar, you could have a new Squier Telecaster or Stratocaster that will likely be in much better and playable condition, level frets, pickups that don’t require repair, etc. – though intonation will likely be off and they’ll still be greatly improved with a professional setup.

But if you want the undeniable allure of the x35 series, the Grote fits the part. But how does it play? Well, after the work done above, it plays and sounds absolutely amazing !

My wife was the first to say something. I’d only been playing the Grote for maybe a minute when she proclaimed, “It sounds wonderful!”.

So, I picked up the Bonamassa and played a bit, then the Gretch and finally the Artcore – mixing some Grote playing in between.

The verdict? There was a subtle difference in sound between the guitars, but absolutely nothing that let you say that one sounded “better” than any of the others, and the Grote did not stand out as particularly unique.

To sum it all up, after a good setup and some “little fixes”, the Grote held its own based on looks, playability and sound!