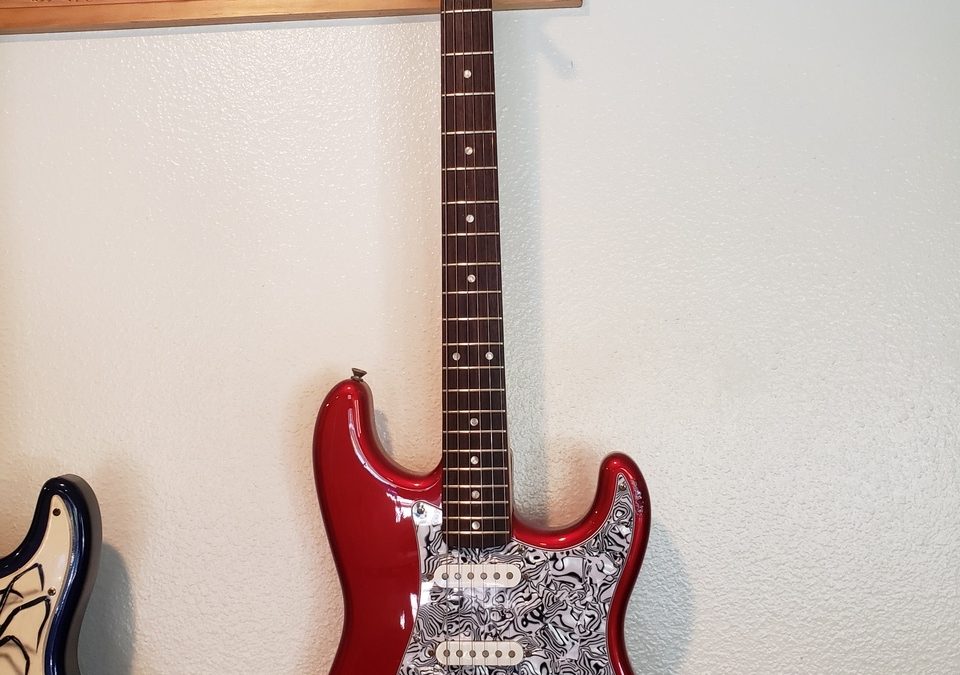 I love looking at guitar ads. Craigslist, Marketplace, OfferUp, Reverb – all of ’em! But having bought roughly six hundred guitars off these ads in the past three years, I know that dark secrets lurk behind most of them.

So, I’m a guitar tech and I know what to look for. But sometimes – meeting in a dim parking lot at night and under pressure of maskless sellers wanting to peer over my shoulder (heart failure from Agent Orange makes me very nervous about Covid19) – I can fail to catch hidden problems too.

The list of potential hidden problems is so long, I could write an entire book! Rather, I’ll take one of the most common overlooked problems and discuss just this one.

The “nut” is that slotted thing up by your headstock, that the strings rest on. (At the other end, by the bridge, they rest on the saddles).

i like to see nut slots for electric guitars, measure at 16 to 20 thousands of an inch when fretted at the highest fret (near the body) and measured between the string bottom and fret top.

if you’re a guitar tech with several sets of nut files (costing about $100 per set!), it’s no big deal. If you’re an individual spending just a hundred or two on a guitar – then having to spend another hundred for nut files may not idea of a “nice surprise”.

And don’t fall for those cheapo “nut-file” sets on ebay! When I got back into guitar teching, I tried every DIY and cheapo file set out there. You really can save on a lot of tools, but IMHO – not with nut files! You’ve gotta pay Stewmac the ransom money!

Now, it’s a great idea to just plan on getting a professional setup for any guitar you buy – used or new. But these are tough times and I know there are many people who just want to spend a hundred or two for a nice new hobby for their newly-found spare time. A good setup is $60. Some places are a bit less, but not all setups are the same. (Read my June article about not all Setups are equal).

The cost of a setup on top of the cost of the guitar and amp might be a bit much for many people, so it’s best to be wary when guitar shopping and inspect the instrument carefully.

So this means that no matter how accurate your open-string tuning is, your playing is going to be sharp (notes too high). And the closer you are fretting toward the headstock, the more your tuning will be off.

But even worse, as the frets get much lower than 0.15, then you’ll likely have buzzing on open strings.

If all the strings are a bit too low, a cheap fix that often works is to use 0.010″ thick aluminum tape as a shim. But unless you already have a roll on hand, it will cost as much as a nut.

If the slots are high – which is the usual problem, you might be able to get by with filing the nut bottom. You’ll have to remove the nut first. You may need to slice through any clear coat or paint that might be holding the nut. A hair dryer will heat the area enough to loosen the glue. Then tap one end of the nut with a hammer and punch. Obviously, this is a delicate operation that is not without risk of damage to the nut or guitar.

Know that if you purchase a new nut, the odds are that it will need slots filed even after you take some off the bottom. Be aware that nuts come in varying widths and lengths and can be curved or flat bottom. You’ll want to match these characteristics with your current nut (assuming it was the correct one for your guitar). They can also be made of cheap plastic, bone, brass, graphite or high-tech plastic.

Of course, a better solution might just be to buy your guitar from a reputable guitar tech (ahem – like me!) Every guitar I sell has already had the nut slots filed down to spec; all frets level; truss rod checked and adjusted; new strings stretched, tuned and intonated; string height (saddle height) set; etc.

Or, spend a tad less on the guitar and leave enough for a good setup, good strings and a new nut, etc. if needed.

Learning guitar is an endeavor you’ll never regret. It’s a lifelong journey that will pay you back many times over for the hours and dollars you invest. For a quick-start on that journey, check out my free beginner guitar tutorial and my “How to Choose Your First Guitar” article.