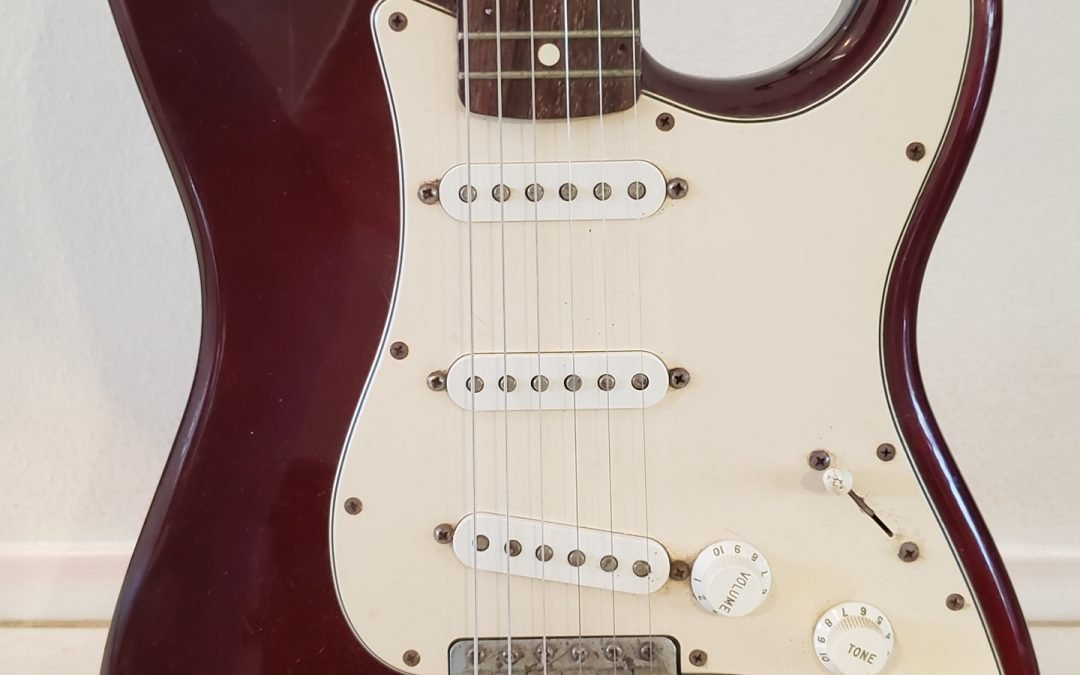 I’ll never forget the first time I learned (the hard way!) that you can’t always detect a fatal neck twist by sighting down the neck.  It was a Mexican Fender Strat and a big stretch for my thin budget.  But in order to play the thing you had to set the action so high that you wouldn’t want to play it.  And forget about intonation!

And then there was the one that had a pretty good bow in the neck, but I thought, “No problem, I’ll adjust the truss rod after I get it home.”   But the truss rod hex head was so stripped and rounded that even StewMacs gripper tool couldn’t budge it.

Fret wear (but these are high enough to level & crown)

I remember the fellow who brought me a MIM he’d gotten off Craigslist and wanted me to eliminate the buzzing fits it was giving him.  The frets were flat and super-low – less than the 1mm height I generally consider as the minimum needed to allow for a decent leveling and crowing job.  The cost of refretting was out of the question for him and an after market neck would slash the guitar’s value in half.

These issues aren’t the only fatal flaws that I see in Craigslist (and other) online advertising sites, but you get the picture.

Yesterday, I got a call from a fellow who asked why I wanted $329 for a Mexican Fender Strat when he’d seen an ad for the exact same guitar last month for just $299.  And that’s what motivated me to write this post.

Look for rusted set screws that may not allow adjustment

When I got the guitar, it was filthy.  Many of the screws were rusted clean through.  The pickup poles were crusted with rust, the saddles were filthy, the fret tops were flattened and some grooves had started wearing through them.

The nut was worn low and B and hi-E were buzzing on the top fret.  The strings were old.  Relief and string height were WAY out of whack, so of course it wouldn’t intonate.  Etc., etc., etc.

The guitar in my current ad had sparkling, shiny, clean saddles and bridge (thanks to hydrosonic jewelry cleaning machine!), all rusted screws have been replaced, the nut was replaced with a properly cut (hand cut) nut, all clearances set to Fender factory specs, new D’Addario #9 strings, tuned, intonated and polished.

So, yeah, I listed it a little bit higher, but still below Reverb and eBay prices.

If you buy from a someone who earns or supplements his income by buying and selling used guitars, you’re probablly not going to have to worry about getting a lemon guitar (but do check them out first!).

First off, we have the know-how and experience to avoid the fatal flaws, second we fix any issues before selling and most important of all – we have our reputation to protect.

We don’t buy the fatally flawed guitars and by pointing out other flaws to the seller, we generally purchase well below the advertised price.  Then after restoring the guitar to (or near) its original state we can often sell at the original seller’s price or just slightly above.

I’m retired and do this work more for the love of working on guitars than for the little bit of money to supplement my SS income.  I think the guy in Largo (Jeff) is about the same.

So whether you’re spending $99 or $999, be careful when buying an instrument that can have fatal flaws that you may not notice.  Heck, often the seller doesn’t even know they’re fatal and figures it can be adjusted.

If you’re going to ignore my advice, at least do these few checks –

Enjoy your guitar!  That’s what they’re for.  If you belatedly discover you’ve bought a lemon, bring it to me or to someone near you who buys and sells guitars.  Chances are that he’ll be able to get your instrument back in good shape at a reasonable (cheaper than GC, etc.) price.  If your guitar has a fatal flaw, maybe he’ll make you a trade offer for parts and fix you up with the kind of guitar you should have bought in the first place.