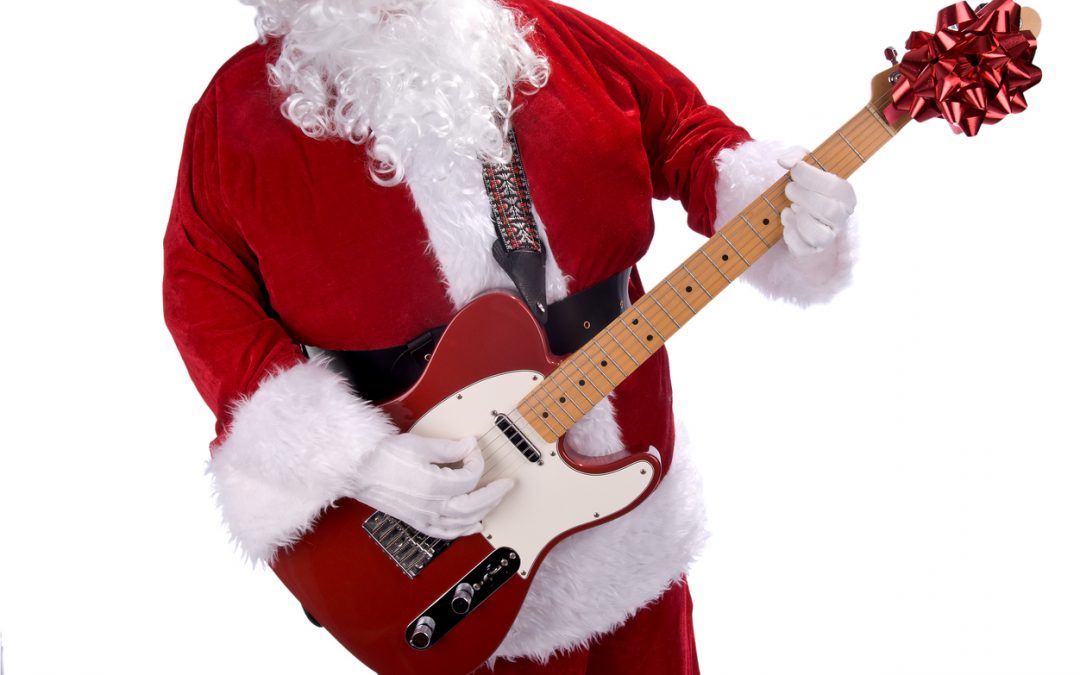 It’s that time of year and maybe you’re thinking of surprising your child (or loved one, etc.) with a guitar for Christmas (or birthday, whatever).

Sure, guitar is a great gift for a child. Who can argue that hours spent learning scales and music theory while dancing like a rock star is better for your brain than afternoons spent on video games?

And guitar is a great hobby for adults too. No matter if you’re twenty or eighty, making slow, steady progress on guitar while playing your favorite music beats stamp collecting hands down!

You’re never too old to begin a guitar journey. I’ve heard stories from those who started after age 70 and were playing great within a year. Of course, seniors often have more time than others for practice.

There is such a variety of guitar styles and colors and – if buying used – conditions that include hidden problems that actually make a guitar unplayable (at least – it can’t be properly played), worn frets that cause buzzing on certain chords/notes, stripped truss rods, etc., etc.

But the biggest reason not to surprise anyone with a guitar gift is that a guitar is a very personal item. Its owner must spend many hours alone with the instrument in their hands.

If there is no joy – no love of the guitar – motivation is deflated. And to learn any instrument, there will be times when you need all the motivation you can muster.

Bring them guitar shopping with you. If that isn’t possible, send them a gift certificate from Sam Ash or Guitar Center.

The player needs to be part of the buying decision.

Oh, and don’t fall into the trap of thinking that beginners should start with an acoustic guitar – Huge Mistake!

There’s a bit of finger tip pain that just goes along with learning guitar – at least, in the beginning. But acoustics are MUCH harder on the fingers than electrics. And since the strings are higher, it’s more difficult for beginners to make chords.

There’s a benefit to the gift-giver for buying electric, too – most amplifiers have headphone jacks so that the guitar can be played nearly silently.

Anyone who’s had to spend hours listening to a beginner practicing on any type of instrument will appreciate the ability to silence the thing!

There was a thread about this subject (guitar as gift) on Reddit, and one post in particular stood out –

I genuinely don’t understand parents buying guitars for their kids without involving their kids in the process.  I mean, I get the ‘oh it’s a surprise and they’ll be excited when they rip it open’ and all that.  But honestly you’re hurting your kid so you can get that fleeting moment of surprise.  Look, that thing is going to have to become their new best friend and compatriot, possibly for life.  Otherwise it becomes their new failure in life.  Let your kid pick the guitar that speaks to them (within financial reason, of course)… the one that makes them want to play everyday day.  It should be their new excuse for not getting their chores done in time.  It should be their new purpose for a couple of years.

You CAN bond with an instrument like that if you’re surprised with it.  Sure, that certainly can and does happen.  It’s just soooo much harder.  Get your kid involved in the process of going to the store, talking to the shop person, learning about this kinda guitar or that kind, what the options are, what kind of music tends to use what… it’s actually part of the gift itself.  Your kid is about to adopt not just a single item, but a whole persona… a whole sub-culture… That sort of thing takes guidance even if you don’t know thing one about music.  And the AWESOME thing is that, as a parent, you get to be involved in the process and see your kid’s soul begin to explode with the possibilities of what they can now do.  Why would you short-change not only your kid, but yourself, for just a few moments of surprise?  I just don’t get it.

The follow up posts agreed with this opinion and many, now adults, complained that their parents had given them an acoustic guitar which they gave up quickly, but when they grew up, they purchased their own electric guitar and learned to play.