How I Prep/Setup a Guitar For Sale 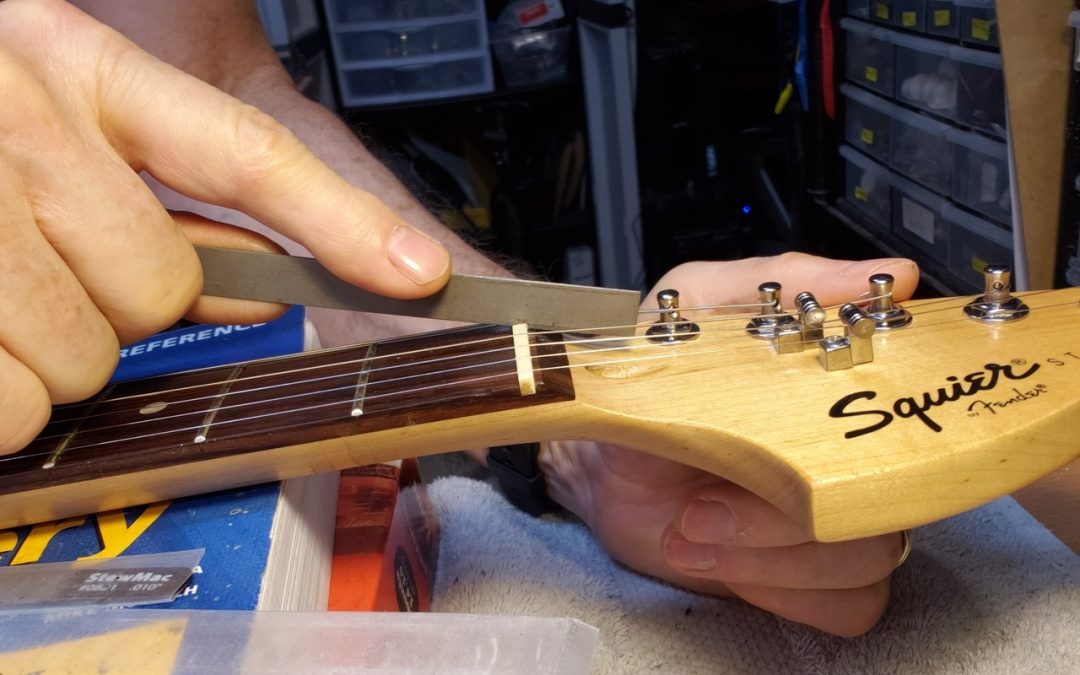 In my “Problems With Used Guitars” article, I said that 75% of your guitar buys will have between 4 and 8 problems that need to be fixed before you have a good-playing guitar.

To prove the point, this post details the work required on the very next guitar I grabbed to setup and prepare for sale. I’ll cover everything I do with the guitar, step-by-step..

This guitar had only 5 major issues (red marks on whiteboard), so it was a relatively “good one”, and yet it was not really playable, needing a nut, saddle and pickup adjustments, fret ends filed smooth and tuner keys tightened.

Sure, a newbie could have bought this guitar and not noticed any problems. They might not really notice the three strings that didn’t ring clear, and blamed the fact that it didn’t sound good on it being “a cheap guitar”. They might not have noticed that the strings were a lot harder to press than they should have been and figured they just needed to toughen up their fingertips. They might not have noticed the weak, unclear sound from the pickups being too far from the strings and blamed the fact that it wouldn’t stay in tune well on it being a cheap guitar instead of the loose tuner keys.

But all-in-all, they probably wouldn’t enjoy the guitar very much and that would likely be a big contributor to their decision to give up playing guitar (as the previous owner had obviously done).

Now, I went on to make this a Super Squier with some wiring mods that gave the guitar 2 extra pickup positions, tone control for the bridge pickup, a treble retention circuit for steady tone throughout the volume range plus a fast-action fuse for safety (in case of faulty amp or PA system).

The fast-action fuse isn’t shown, but I install them in the jack cavity for easy access. But the fact is, if that fuse ever blows – it probably saved your life!