Tonewood and Other Myths 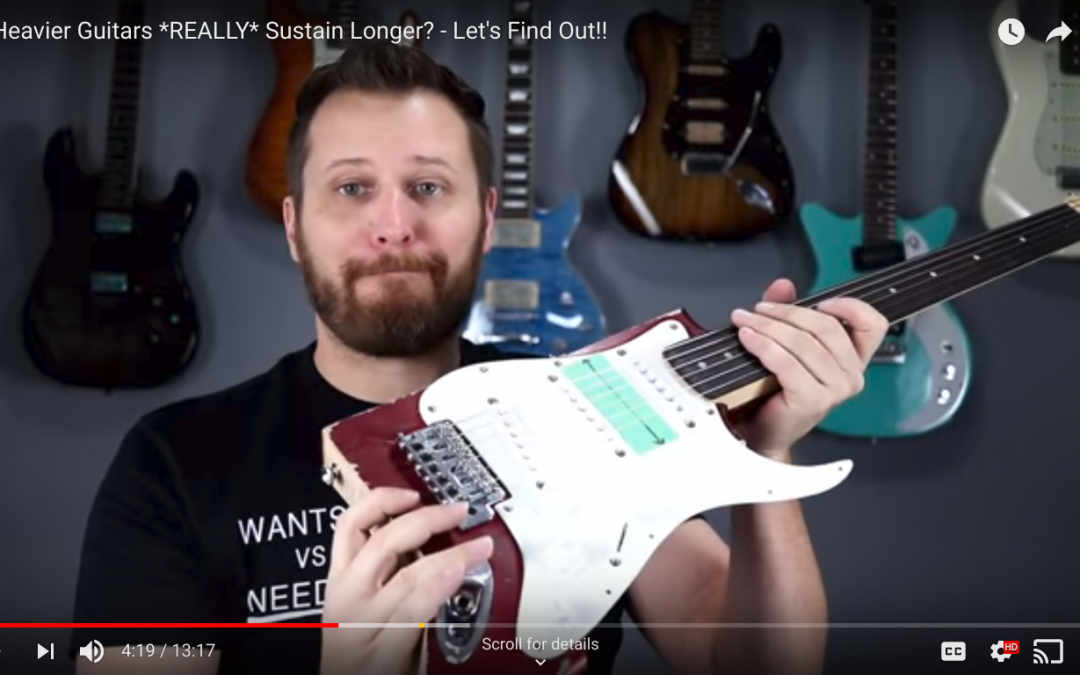 As a hard-working small town guitar repair guy, I’m a little reluctant to disagree with the likes of Paul Reed Smith and others who tell you how important it is to have your guitar built from awesome (and expensive) “tonewood”.

I’ve been in the video production business and I have some experience with microphones and how the environment can affect audo quality.  But none of that applies to solid-body electric guitars.

I’m linking to Darrell Braun’s excellent video showing how there is really no difference between a heavier guitar body and a lighter one, or wood versus no wood, in terms of tone and sustain.  (Click to see video)  BTW, I recommend browsing through his excellent guitar video selections!

And keep in mind, your guitar’s pickups are actually NOT very similiar to microphones.  They’re not mics, they don’t “pick up” sound waves from the guitar strings and convert them to electronic signals sent to the amplifier.

The pickups’ magnets create a magnetic field.  A vibrating string is a conductor moving through that field which induces a tiny current into the pickup’s coils.  That current is then sent to your amplifier which..well, amplifies the signal and converts it into an audible sound.

Even if mounted directly to the body, can you come up with a scientific description of how the guitar body material (i.e.: “tonewood”) could have an effect on the magnetic field or movement of the conductor through the field, without delving into the realm of quantum physics?

Would a mahogany guitar body really sound different from basswood?  Since we’re not dealing with soundwaves, but magnetic fields and vibrating conductors – nothing is being bounced back from the body.

If there could be such an effect, it would have to be incredibly miniscule.  Could your ears really detect it?

Think, “Is that enough to make a big difference?”  My ears may not be the best.  My Rottie mix, “Ellie” can hear much better than I can.  She can tell a FedEx truck from the UPS or garbage truck, a block away!

She really doesn’t like the FedEx guy, UPS is sorta “meh” and she just loves the garbage men!  And from a block away, she’ll either growl, wag her tail or she’ll just lift her head, rotate her ears, then rest her head on her paws again.  And I’ll know just who’s on the way.

Maybe Paul Reed Smith has ears like Ellie.  (But can he rotate them?)

Our ears are sorta like microphones; they gather sound waves and convert them into signals and send them to our brain instead of an amplifier.  The problem with this is that our brains handle a lot of other chores too, and they’re influenced by expectations, sort of like the placebo effect.

In other words, if Paul Reed Smith – a noted authority on guitars – tells you listen to this “crappy guitar made of paper mache”, then strums a few chords, then says, “Now listen to this awesome PRS $19,000 guitar” and strums a few chords, your brain is going to try hard to deliver what you expect to hear, and you’re likely to feel that the second guitar sounds much better.

While our ears are not a scientific method of determining the best sound, they are the best method because music is meant for the consumption of human ears, right?

It reminds me of the time I recorded myself playing from a Squier and then an American Fender guitar and sent both to a professional guitarist to hear, telling her that the first was the Fender and the second was the Squier.  She affirmed that the second recording sounded much better.

Oops!  The next day I realized that I’d gotten the order of the recordings backwards!  She’d actually preferred the Squier.

I’ve worked on and played many Squiers, Ibanez, Epis, etc. and many Fenders.  Even my ears can detect a slight difference and I prefer the Fender sound, but when played as an accompaniment instrument, it is a rather ethereal, tenuous difference when the Squier is properly setup and has new, quality strings, etc.

Differences stand out a bit more when the guitar is the lead or solo instrument, of course.  But even then, if a big-name guitarist were to go on stage with a Squier Bullet, properly setup with good strings, I seriously doubt that a single audience member would notice a difference without zooming their camera lens onto the headstock.

There are other differences of course – neck playability, string action, tuners, etc.  But most differences can be attenuated by a qualified guitar tech.

In my opinion, all this tonewood and guitar quality stuff – at least in regards to sound quality is 90% marketing.  Trained ears will appreciate a quality guitar over a budget model, but I’ll bet coffee and a donut that even their ears can’t tell basswood from mahogany, especially when both woods are covered with a thick, polyurethane finish!

I was buying pickup height foam the other day and had the bright idea of reselling some as “tone foam”!  🙂   Now, off to Kickstarter to get my Tone Foam business started..