How to String a Mandolin 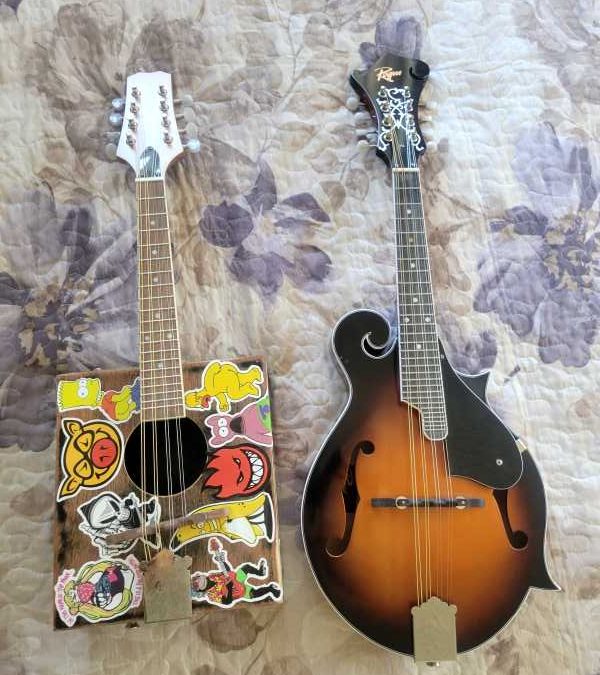 Sure, I could have used a pic of a plain old Type-A or Type-F mandolin, but why do that when I can use this crazy, unique cigarbox mandolin?

A quick aside – a few cigarbox instrument makers are qualified luthiers or good guitar techs, but most are artisans who know little about making playable instruments. This one is an example of the latter category, unfortunately. The scale length is wrong for the fret spacing and the body top can’t take the stress from the bridge and is caving in although it’s still nearly new!

Before you begin, take note of where the bridge is placed and which side is front. Your scale length (from nut edge to where the highest string contacts the saddle), should be 14″, but there will likely be a slight angle to the bridge, causing the heavier strings to be just a tad longer. This is for proper intonation.

The first step is to loosen the strings in a way that won’t tend to put too much uneven pressure on the neck that might risk warping.

I begin with the outside strings, loosening each tuning peg a full turn, then I move to the inner strings and do the same. I repeat the procedure but this time I relieve all the tension.

At this point, I generally find it easier to just cut the strings in the middle before carefully unwinding each string from its tuning post. I say “carefully” because those sharp string ends can bite!

Next I turn my attention to the tailpiece (just past the bridge/saddle). It has a cover that slides off. This one, being rather new, was very tight and I was afraid the fragile cigarbox might not stand the pressure, so I undid the three screws at the foot of the box, and removed the entire tailpiece so I could apply the force needed to remove the cover without risking damage to the cigarbox.

When I replaced the cover (later), I used a dab of Chapstick along the cover sides so it could be removed next time, with less effort.

Installing the new mandolin strings is the reverse of removing the old strings. We’ll begin with the outside strings, looping each under it’s pin, guiding it over its saddle (yeah, don’t forget to replace the bridge/saddle!) and through its nut slot.

Turn its tuning peg so that the hole is 90° or a bit greater (9 o’clock for the lower-side strings, 3 o’clock for the top-sides), feed the string through from the inside/center part of the headstock with each string about four fingers high at the 12th fret (to allow for 2 or 3 turns around the tuning post), and make two sharp 90° bends like half a swastika.

At this stage, I use wire cutters to clip the extra string about 1/4″ (6mm) from the post. After tuning, I’ll clip them a bit shorter still.

Turn the tuning post to tighten the string until you get a clear tone when it is plucked. Keep an eye out to ensure the string is in its proper slots at the saddle and at the nut.

When you have all eight strings installed, and the tailpiece cover replaced (remember the Chapstick!) it’s time to tune and stretch. No, don’t get out your yoga mat – we’re going to stretch the strings, not you!

First, you need a tuning device. Since most of us have smart phones, I recommend a free guitar tuning app called “Guitar Tuna”, available for Android and iPhone.

You can pay them five bucks to upgrade to the ‘Pro’ version that has tuning for banjos, mandolins, etc. and that’s probably what you should do. However, if you’re careful, you can get by with the guitar version.

Starting at the bottom (thinnest) string pairs, we’re going to tune to e5. ‘e’ stands for the note and ‘5’ stands for the octave. Pay attention because overlooking this “little point” is what causes people to break strings!

You see, tuners are sometimes confused by octaves and it could start turning green (meaning you’re getting there!) as you approach e6 – but that would be an octave (13 half-tones) too high and the extra tension could break your string.

With this tuner app, I’ve always found the octave number inside the circle (just below the needle) to be accurate, so keep an eye on that.

Don’t go for the right note immediately. Shoot for about two whole notes below on the first time through the strings.

In other words, your bottom string (thinnest string & highest tone), you’ll tune at C5, the next pair of strings we’ll tune at F4, then B2 and the top strings (thickest) we’ll tune at E3. (But do the outside string pairs first, then the inner pairs)

Confused? OK. Think of the alphabet as having just eight letters that repeat. Oh, and they don’t start with ‘A’, but instead they start with ‘C’ – C through B. Huh??? Like this:

Don’t blame me for this system! It started with the ancient Greeks and a dude named Pythagoras – yeah the same dude who gave us fits in geometry class! And a fellow named Guido D’Arezzo sort of wrapped it all together into this system. (Remember that – there’ll be a test on Friday!)

OK, back to tuning. Once you’ve got all eight strings within two full-tones, let’s tune up to just one full-tone away. So the bottom (thin) strings that we eventually want to get to E5, we’ll tune to D5. Next set will be the top strings (remember, outside string pairs first), which are target is G3 but we’ll go for just F3 this cycle.

The inner pairs starting at bottom side (A strings), we’ll tune at G4, the upper inner strings (D4) we’ll tune to C4.

Now repeat the process starting with the outer pairs, then inner pairs and tune to our final target tones.

We’ll repeat the process with each pair of strings until they no longer go flat (out of tune).

With new strings, you may need to retune daily for awhile. Eventually they should stay in tune for an hour or two of playing, at least.

Well, there you have it. You’re now a trained mandolin string installer!