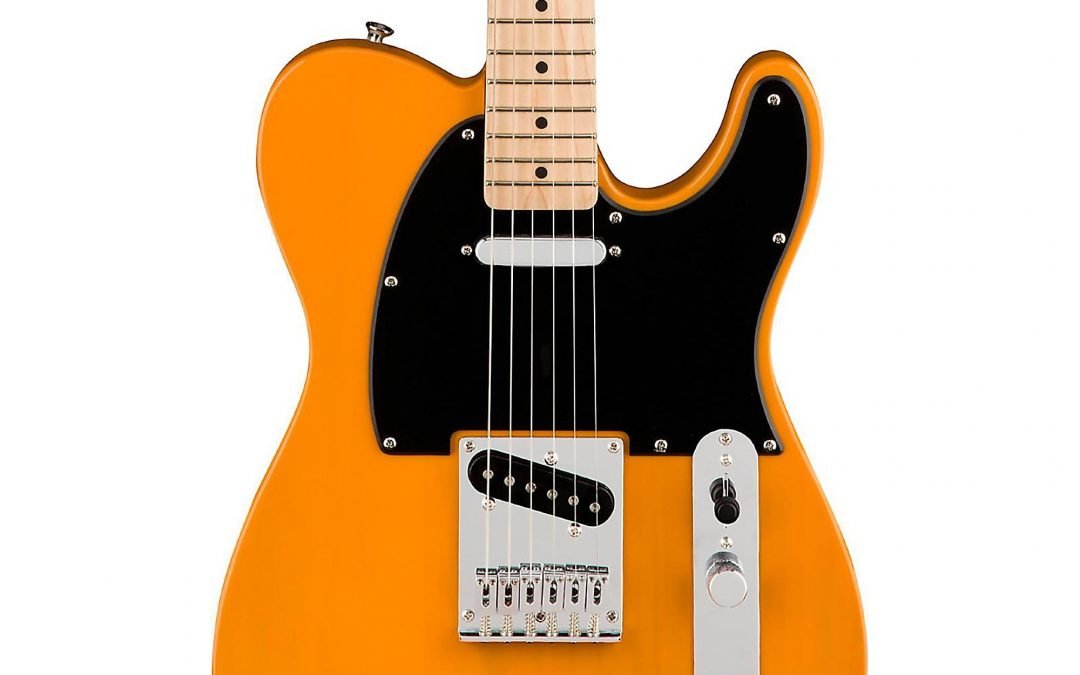 There were several issues with these guitars that made them totally unacceptable. One issue might have been figured out and fixed by a few beginners, but not the others.

You read that right – if you’re new to guitars and have never done any guitar tech stuff, you will not be happy with a new Squier Bullet Telecaster and probably not with an Affinity either. Read on to learn why and how I fixed these problems – and how these guitars measured up overall..

I purchased four brand-new Bullet Squier Telecasters online from Musician’s Friend, with the idea that I would give each one a good setup, then resell at slightly more than I’d paid.

BTW, this guitar played and sounded great after our setup! The setups included –

– All new guitars should get a proper setup!

But what I found was that even after a proper setup, these guitars were not playable! Any competent instructor would tell a student that the guitars were unusable.

Guitar strings require a solid anchor at each end – the saddles (at the bridge) and at the nut (near the headstock). Telecasters, and many other guitar styles, depend on a sharp angle of string break past both points for the strings to ring clearly.

If the break angle is not sharp enough, the notes will not ring clear and they may “buzz” as they vibrate on the saddle or nut.

I’m just showing and writing about the first guitar, but the other three all had the same issues.

The string windings coupled with the closeness of the tuner key post, of the low-E string were enough to give a good angle of break and E rang out clearly. The string guide should have taken care of the B and e strings, but it was too tall and those strings did not ring out as clearly as they should and you could clearly hear a buzz from the B string. I replaced the spacer with one about half its height and that fixed B & e.

But A, D and G sounded dead and buzzed on the nut, also because of insufficient break angle – on each and every Squier Bullet Telecaster. I’ve seen this problem on Squire Affinity Telecasters too.

I added a string tree to fix D and G. But a third tree is unheard of. What people do to get a good break for A is to use a few windings of string to pull the angle downward.

Maybe Squier saved a few pennies by keeping the strings short, but there weren’t enough windings on the A string to give the needed angle.

The fix for this string would have to be replacing the string and at least three full winds on the post to give a decent downward angle from the nut.

It takes about three winds around the tuner post to make the difference. Even this tiny extra amount was enough to go from a dead, buzzing string to nice clear tones.

Finally, all six strings ring clearly and no buzzing! But that wasn’t the only problem. As in most new guitars, the strings were not sufficiently stretched. A few minutes of playing and strings were going flat – especially the wound strings.

It took a few times of going up and down the fretboard from saddles to nut using my thumbs and fingers opposing to laterally stress the strings while pulling a bit upward to help tighten the tuner key windings to stretch the unwound strings (G through e). I retune after each string. You can tell when you’ve stretched enough because the string won’t need retuning or only a tiny bit.

The wound strings took a half dozen times up and down the fretboard, retuning after each time. After sitting an hour or two, these strings will go flat again. I like to set them aside overnight then give it the “last” retune.

The relief was close, it measured 0.015″, but that’s half again more than it should have been, so I adjusted it to 0.010″. While doing that, I noticed that it took a bit of turning before I felt any resistance at all. This is common on inexpensive guitars – the factory tends to just slap the truss rod in with no adjustment whatsoever.

The nut slots weren’t too bad on two of them but the other two had slots way too low and a couple of the strings were buzzing when played open. Those nuts had to be replaced – a big job for a newbie with a new guitar, and I wasn’t too happy about it either although I have a supply of nuts and all the tools, it’s still a good half hour of my time lost.

Two or three slots on the other guitars were a bit high and I filed them down (from E to e, about 0.020″ to 0.015″*). They would have caused notes and chords in the top five or so frets to go a bit sharp.

* (Since these are plastic nuts that wear quickly, I don’t file them down below 0.015)

Once the relief was set, the string heights all looked good and I didn’t have to adjust saddles on two of the guitars. The other two needed a little tweaking.

The Bullet Telecaster was easy to tune. The tuner keys felt smooth and there was no slack, just a nice solid control – turn the key a bit and the tuning changes a bit. Not Grovers, but very direct and serviceable. It’s possible that the tiny bit of Chapstick I coated the underside of the string guides with, helped with that. Yes, I said Chapstick. Tons cheaper than Nut Grease and works just as well.

I was surprised to find the intonation was pretty close on all four guitars, except for E and A. The heavier wound strings were pretty far out, perhaps partially because they set intonation before stretching the strings. The threads were bad on one of the A saddles and I had to replace it.

The guitar feels great – not too heavy or too light – but lighter than a Mexican or American Fender Telecaster. It’s very well balanced – not like a Harley Benton!

Big problem with treble roll-off though! The guitar sounded great with the volume all the way up, but after my wife shouted to turn it down and I went from 10 to 7, there was a huge drop in treble and it started sounding muddy.

I’m going to add treble bleed circuits to these guitars to fix this problem. Honestly, unless you glued the volume knob to “10” or just stuck with the bridge pickup, these guitars sound awful once you dial the volume from 10 to around 7 and lower.

Left, is one of the treble bleeds I made. Image to right shows same thing after shrink tubing to prevent shorts.

The treble bleed worked wonders! The Squier Telecaster gives clear tones and retains the full range from treble to bass as you turn the volume down from 10 to 7 to 5, all the way down to 1! In bulk, these capacitors and resistors (1200pf cap with 150k resistor in parallel and 20k resistor in series) probably cost me ten cents a set. What would it cost Fender to add them? A nickel? A penny?

I’ve seen treble bleeds in American made Fender guitars. Maybe they just don’t want their cheaper models rivaling the better ones too much?

Note: I didn’t have exact spec cap & resistors, so I used 1500pf cap and a 220k for the parallel resistor and got wonderful results.

Any new guitar needs a setup. Period. But we know the buyers of inexpensive guitars buy cheap guitars because they don’t have a lot of money. It’s seems unreasonable to expect someone to buy a $200 guitar and spend $50 or more on a setup.

But what’s the alternative? A beginner probably wouldn’t recognize the problems and know how to fix them. They’re gonna think it’s a lousy guitar or they’re a lousy player or both. Odds are very high that they don’t continue learning guitar.

Honestly, after fixing all the issues talked about above, this is a really nice guitar – but that’s a lot of issues! Nothing expensive though. All but the treble roll-off problem would be fixed with my special $25 setup offer (see below). Adding a treble bleed circuit would add another $25 though, so you may just decide to play with the volume set to “10” – that’s the most fun way anyhow! 🙂

This is why I’m offering a special this holiday season. I’ll do a setup (like discussed above) and intonation for just $25 – while you wait – if you bring a new guitar costing less than $300.

This offer is only for new guitars because I earn every cent of my full rates on used guitars. And it’s only for inexpensive guitars – guitars with advertised retail prices less than $300. Plan to spend about half an hour sitting comfortably in our lanai while I setup your guitar.