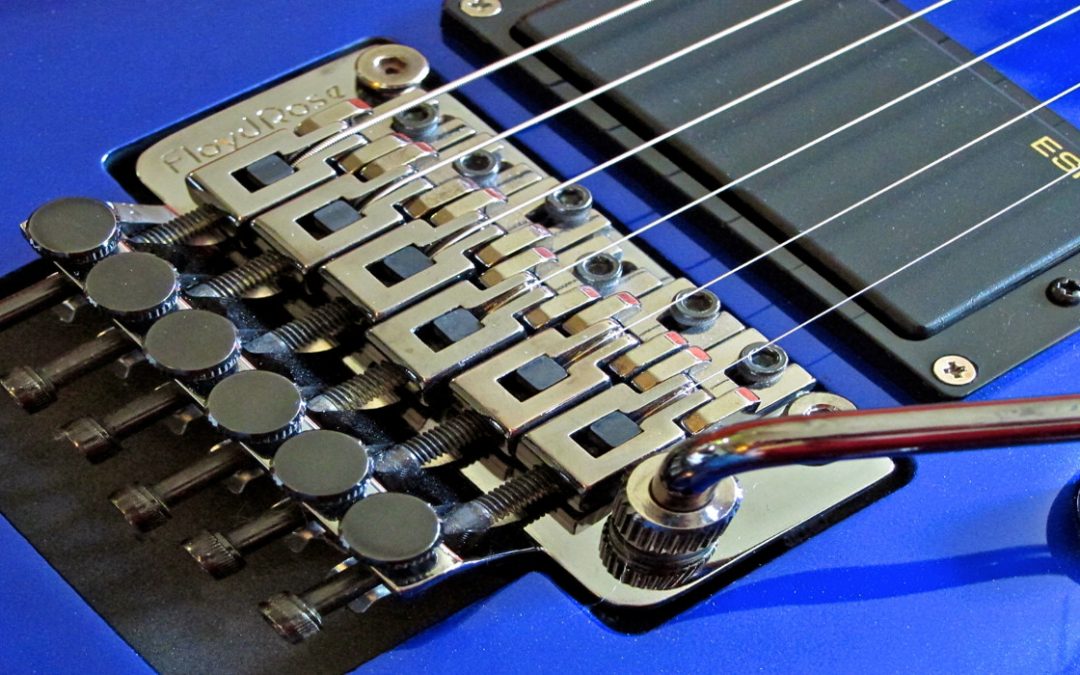 I’ll get right to the point – the special handling needed for Floyd Rose systems.  Shucks, I won’t even give you my line about Floyd Rose being a solution in search of a problem – honest, I won’t!  🙂

OK, so a customer brought me a nice Fender Mexican Strat with a Floyd Rose locking system, saying that it just won’t stay in tune.  Heck, you could hardly even get it in tune to begin with!

He’d just bought it from Sweetwater and was sure something must be wrong with it.  I asked on the phone, “Did you stretch the strings?” – “Yeah, of course.” was the response.

So I get the thing on my bench, try to tune to pitch and several strings slid back flat just before reaching pitch, but none pulled out from the saddle pads.  “Ahha! Lock nuts aren’t tight.” – Right on.

So, I removed the lock nuts just to take them out of the equation and it would still quickly go flat after tuning.  So I tuned the low E, stretched it a bit and checked – more than a half-tone flat! Similar, though less dramatic with all the other strings.

I can’t tell you how many times I’ve encountered customers who apparently think that stretching the strings means giving them a gentle pull once or twice!  You want to give each one about three pounds of pull using both hands evenly up and down the length of the strings, each round – and it takes several rounds.

OK, so here’s how you tune your FR with new strings –

Keep in mind that we want to balance the string tension with the spring tension so that the bridge is parallel to the body surface.  Everytime you change tension on strings a corresponding change occurs on the springs and vice versa, changing tuning and bridge position – so everything is a balance.

Leave the lock nuts off;  tune and stretch like you would any other guitar, except instead of six or eight rounds of stretching, we’ll do ten or twelve – at least on the wound strings.  And we’ll do them in stages. After the sixth round, play the guitar a bit. Then strum all six open strings a couple dozen times – hard!

Two more rounds of stretch and tune, then play a bit then strum the open strings a bit.  Retune.

Now, leave the guitar in the stand and reward yourself with a donut and a cup of coffee.  Wait a couple of hours, then come back. Strum the open strings a few times then check tuning.

If the low E is off no more than five cents, then one more round of stretch, tune, play and recheck tune, should do it.  Otherwise, it’s “deja vu” all over again!

When everything is stable, you’re almost ready to lock down the nuts.  But first, back off the fine tuning knobs all the way, then one half turn the other direction.  Yeah, I know the books say to put them in the fifty-percent position. Don’t listen to them!

Let the guitar sit a bit.  Maybe overnight. Sometimes after stretching, strings will recompress.  We’ll want to catch that here and now, because we didn’t leave much room for flattening strings on the fine tuners.  OK, NOW lock down the nut, and do any fine-tuning that may be needed.