Nuts! (How to Remove a Guitar Nut) 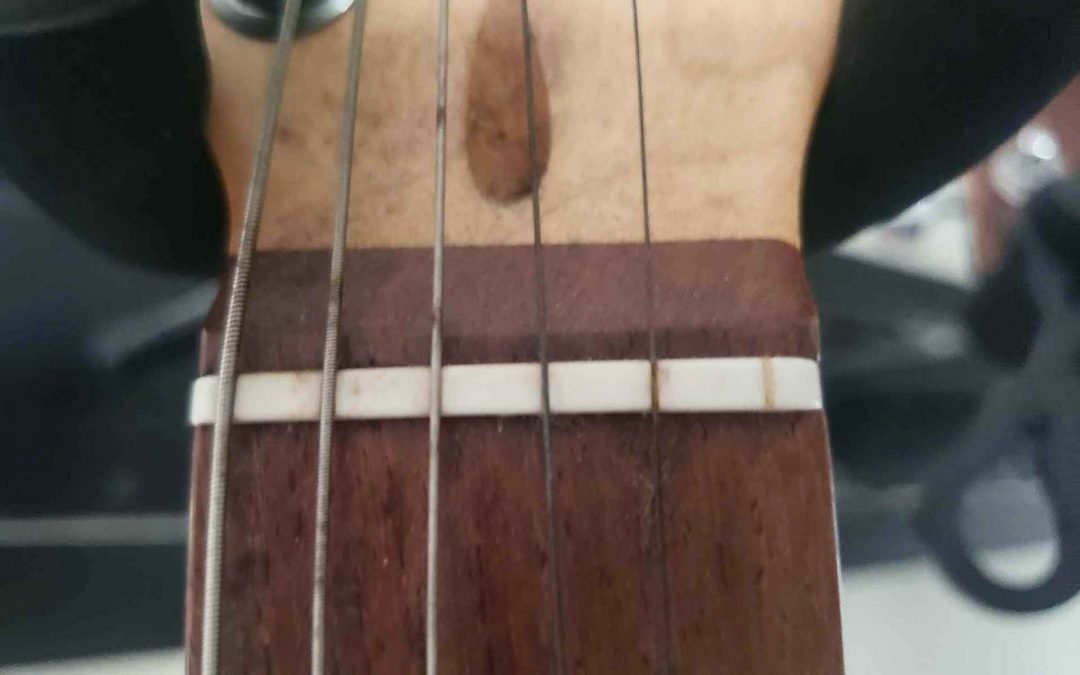 Even on respected websites, I often see misinformation on the subject of removing a guitar nut. For instance, many sites show using a block of wood in front of the nut then knocking the nut out with a blow to the block of wood.

Well, if you have a guitar that doesn’t use a slot for the nut – just a drop from the fretboard to headstock with no wood behind the nut, then this will work fine for you.

But if you’re guitar is in the majority where the nut sits in a slot, (as in the featured image above) then you have a good chance of breaking the back of that slot, and causing serious damage to your guitar fretboard.

So let’s take a look at the most common nut situation (Fender & many others) where the nut you want to remove, sits in a slot..

I used to use a vertical stand I made out of wood, but I like my 3d printed guitar stand better. This frees my hands to work on removing the guitar nut.

Now, let’s examine the nut and see if there are any areas where we need to use an Xacto knife to cut away overlapping finish or glue..

I used an Xacto knife to carefully cut around any edges that appeared to have overlapping finish or glue. This is especially important on Gibson guitars where the factory usually clear coats right over the nut ends!

I used a heat gun at about six inches, for a minute or so, varying slowly from front to back of the nut. I watched the fretboard closely for any signs that sap might start bubbling and would have immediately removed the heat if that had happened.

Once I felt I had the glue softened (based on experience – usually around a minute), I used a punch and small hammer (which I’d set close by before grabbing the heat gun) to lightly, but sharply tap the nut end (see photo below)..

If the guitar nut is stubborn and refuses to move, go back to the earlier step of examining for finish or glue along the edges..did you miss anything? Try cutting a bit deeper (if you’d cut around glued/finished edges earlier). Then try a bit more heat. Maybe move the heat gun a little closer (four inches or so), but keep the gun moving, slowly but constantly.

You can try using fret puller pliers, while applying heat, but be careful of the fretboard finish.

Sometimes the nut just won’t budge. Thank the previous guy for using epoxy! In this case, you’ll use a small craft saw to slice right down the center (length-wise) of the nut all the way down to (but not through!) the wood. Now, between fret pullers, the saw and small files, you’ll get the nut out, piece-by-piece.

I was lucky. The guitar nut came out quite easily and left a pretty clean slot to install the new nut. Notice all the scratches and dings from previous “guitar techs”. Follow the instructions in this blog article and your guitar will be spared much damage and you’ll remove your old guitar nut fairly easily.