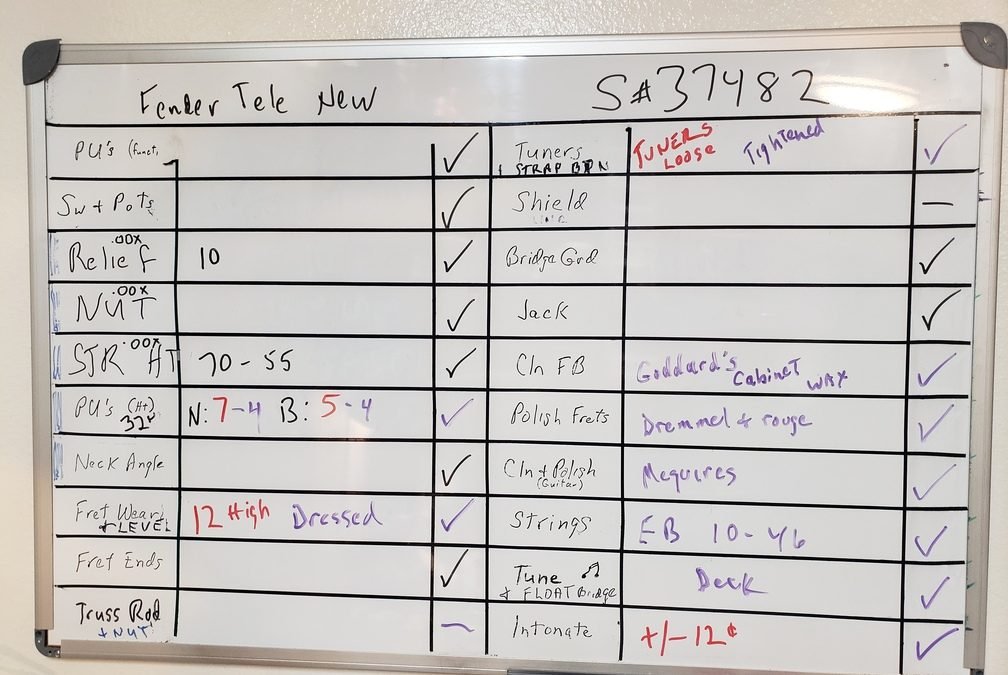 I think it’s pretty much understood that inexpensive guitars are probably not going to play right until they receive a proper setup. But what about pricier guitars? What about a Fender $700 Telecaster???

A customer brought in this beautiful Fender Telecaster for a setup and to change the nine gauge strings from the factory, to ten gauge.

Right off, I knew I’d have to check the wound string nut slots because the wider tens would likely bind in the nut, causing tuning problems. The 0.046″ diameter E string of the tens is nearly ten percent wider than the 0.042″ diameter of the nines.

Sure enough, the E string didn’t sit at the bottom of the nut slot and binding was an issue. I also had to widen the ‘A’ nut slot. Oddly, all the other slots were fine and ‘e’ and ‘b’ were even a bit sloppy for the tens!

Nut slot issues are to be expected when moving from standard nines to hybrids or tens, etc. But what about the overall setup? Was it playable straight from the factory?

The guitar was one of the best “pre-setup” jobs, straight from the factory (or Sweetwater, etc.) that I’d seen. (See whiteboard photo). And yet, I’d have to say, “No. It was not playable.”

Neck relief and nut slot heights were spot on. String height was definitely “on spec”. But poles from the neck pickup were twice as far from the strings as they should be, making for a weaker, muddier sound. Bridge pickup was just a bit low. But I wouldn’t call a guitar “unplayable” just because of a weak, muddy sound.

The twelfth fret was high on the ‘e’ end and causing buzzing. The tuner key 10mm nuts were so loose you could turn them with your fingers. And intonation was off about an eighth of a semi-tone, on average.

My customer is a professional musician and wouldn’t want to be on stage with a weak, muddy, buzzing, off-tune guitar. But I doubt if you’d want to play one in your living room either. When you buy a guitar, new or used, just mentally add a setup fee to the cost of the guitar and “Git’er done!”.

I’d like to stress that even though this was one of the best setups I’ve seen coming straight out of the box, it still had big issues. It’s rare that I don’t have to adjust relief, string heights and nut slots on a brand-new guitar. In the past four years, I’ve seen just one where the intonation came accurate to within five cents. (Which is still not accurate enough!)