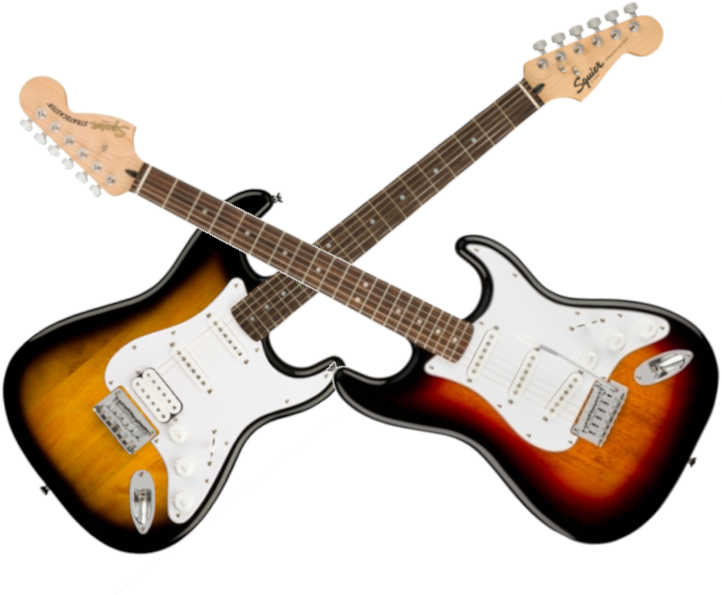 Affinity versus Bullet? You’ve probably heard it all. At least I thought I had until someone sent me a link to GuitarSpace dot org (I’m not going to give them a link!) and MusicianWave dot com.

It may not be fair to pick on these two websites because BS about Squier Affinity and Squier Bullet guitars is everywhere. On the other hand, when a writer is obviously just making stuff up as he goes, he’s fair game! So Game On!

(I’ll post my opinion of the REAL DIFFERENCES between Affinity and Bullet, at the end of this article)

Maybe it’s not so important that a writer gets the neck wood type wrong, even though they’re feeding their readers BS. But when you compare that to the fact that the writer doesn’t understand that fretboards can be made of Indian Laurel, but necks cannot! Guitar necks are made of hardwood, by necessity.

And Rosewood is no longer allowed to be imported, so it’s no longer used on Squier fretboards.

At least they didn’t make the mistake that MusiciansWave-dot-com made, saying –

Ceramic pickups aren’t particularly noted for “clarity”, AlNiCo pickups are generally preferred for that. But what is this “standard ones” stuff??? MW doesn’t specify.

Go on Amazon, eBay, anywhere, and shop for the cheapest guitar pickups you can find. Guess what? They’re all ceramic, aren’t they? You pay a bit more for AlNiCo pickups (with better clarity), and maybe there’s a spattering of exotic pickups with different magnet types at much higher prices.

Bottom line: There are no “standard pickups” in a class below ceramic pickups!

I won’t even touch the phrase “The electronic pursuit is slightly better…”. OK. I lied! I WILL “touch it”! What in the ding-dong #@&^* does “electronic pursuit” mean, in terms of guitar-speak? Sounds like a near-future episode of Cops and Robbers!

Affinity guitars are not “more twangy” and do not have “…more tonal versatility”. Absolutely, totally false!

There is at least one bit of truth here, Squier Affinity series guitars do cost more, nearly half-again more, than Squier Bullet guitars.

As for “higher-quality parts”, let me put it this way – I love Squiers, both Affinity and Bullet series, but you can’t hardly get cheaper hardware, pickups, nuts, tuner keys, etc. than Squier Affinity Guitars have. To be fair, I could say the same for every other guitar make in the sub $300 price range. In fact, they probably all buy from the same suppliers!

Hardware and tuners may affect tuning stability. Nut material may affect the warmth of your sound a tiny bit. But there is no such thing as “higher quality sound” unless you compare it to fingernails on a blackboard! There are just “different sounds”. And neither your hardware nor tuner keys are going to affect that sound. It may affect sustain, but not between Bullets and Affinity guitars.

Some Bullet models may have had more variance in quality control than Affinity Squiers, but I’m not seeing that in the past few years. In fact, several well-known professional guitarists are playing Squier Bullet guitars!

The MW writer used the term “Standard” quite a bit, sometimes capitalizing. He was apparently unaware of the confusion this could cause since Squier, until a couple of years ago, actually made a “Standard Squier” model guitar, which was priced between the Affinity Squier and the Classic Vibe models.

Really? Just how are they better? Same magnets, same wire, same resistance readings. Both Affinity and Bullet models have five-dollar ceramic pickups as far as I can tell. I have both new and used Affinity and Bullet guitars and drawers full of loaded pickguards I’ve removed during upgrades. I can’t find a difference. What sound difference? What do you attribute it to? I think the writer is blowing smoke!

But how is the sound created in a solid-body electric guitar? By moving strings (iron core) through a magnetic field (supplied by the pickups) which creates a tiny electric current. This is the end of the guitar’s contribution of the sound. That tiny current is sent to the amplifier to get – amplified, then sent to a speaker.

The wood did not contribute to that electric current in any meaningful way. Certainly not in any way that the human ear could detect. There are many things that can subtly influence a guitar’s sound, but the body wood difference between an Affinity Squier and a Bullet Squier is not one of them.

What in the world is the writer saying here? The bridge is hardware. Does “sealed die-cast hardware” mean the bridge is sealed??? And “sealed” vs “standard” means that “standard” is not sealed? Let’s have a look at some Bullet tuner keys (the only kind of hardware where “sealed” would make any sense at all)…

Fret quality can vary a bit on cheap guitars, but nowadays it is rare to find uneven frets. No, you’re not likely to get polished frets on a guitar costing under $300, but the $700 Fender Player series frets need polishing also. Fret ends on the Player are likely to be smoother than either Squier Affinity or Bullets.

It might be fair to say that a Bullet is more likely to need a bit of sanding on the fret ends than an Affinity series, but I’d have to see bigger numbers to be sure. I only work on one or two Bullets and Affinity Squiers each month lately, which isn’t enough to make such grand pronouncements.

What Are the Real Differences Between Squier Affinity and Bullet Guitars?

Bullet guitars tend to be lighter, often a bit thinner. Some affinity guitars may have a slightly wider fingerboard at the nut, but not all. You’d expect Affinity guitars to have a better finish than Bullets, and maybe some do, but I can’t tell the difference between mine and I have three new Bullets, one new Affinity, one used Bullet and two used Affinity Squier guitars.

Today’s Bullet models are all hard-tailed, from what I see online, while Affinity guitars offer tremolos. But beginners should probably not have tremolos anyway. To be honest, most players at any experience level, don’t use them.

Other than these, the biggest differences are in marketing and the misinformation posted online. With the tremendous competition offered by other low-priced guitar companies (GlarryMusic.com, Monoprice Indio guitars, Grote, FireFly, IYV, etc., etc.) Squier can’t afford to further skimp on quality in their Bullet series, so the differences have been seriously narrowed.

It would be better to pay attention to the differences between Squier Bullet guitars and other brands such as Indio. You can’t go wrong with the Squier name, but you can often do better for the money.

Fender must love the “Squier Affinity series versus Bullet series” arguments, since they win either way!