Squier P-Bass – How Cheap Can Fender Get??? 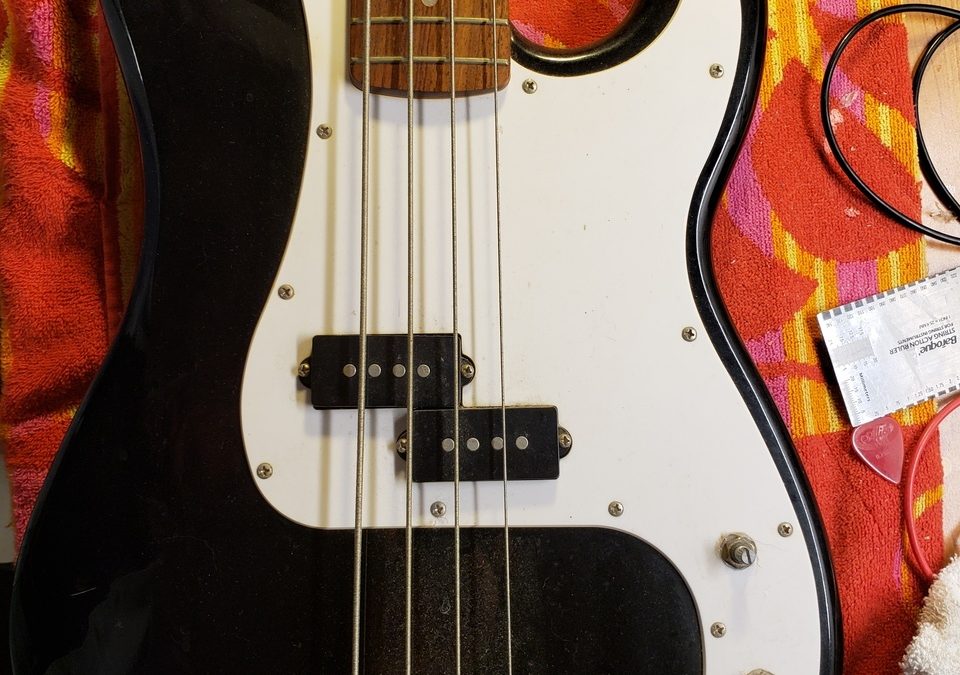 I don’t have much time this morning, so I chose a guitar that looked like it wouldn’t need very much work. But it seems it’s always those innocent looking guitars that bite the hardest! Read on to learn how badly Fender cuts corners on these..

(Now keep in mind, I buy these off Craigslist, Marketplace, etc. just like everyone else, so this is a glimpse of what you’re likely to run into when buying used guitars..)

The only thing that stood out at first was that the G-string was loose. I tuned up the strings and took my measurements –

Nut slot heights were ok – about 0.015 inch – much better than usual. ReliefRefers to a bow in the guitar neck intended to allow strings... was a whopping 0.035″, but the 3/16″ truss nut was good and I brought it down to just barely under 0.015″ and there was plenty of movement left for future adjustments.

String height was almost off the chart at skyscraper level – 0.140″+ But the neck angle and threads on saddle screws show that there is lots of room for adjustment, so I’ll do that later with the new strings.

After removing strings, I checked each fret for level end-to-end (E to G) and found four high fret ends – all under the G string, which would have caused buzzing for many players. Maybe that was why the action was set so high?

I used 600 grit sandpaper and brought those high frets down and rechecked to be sure they were level and that I’d preserved the crown.

They hid their misdeed by using fake screws to cover the other two holes in each tuner key! Can you believe that???

I agree that Squier generally offers a lot of bang for the buck and is a good choice not just for beginners but for any player on a budget. But I’ve argued for years that many other companies offerings are just as good and often better. I couldn’t ask for a clearer illustration than these photos!

I’ve never seen a Jay Turser, Silvertone, Washburn or Harmony cut corners this bad. It seems that only the biggest marketers – Fender’s Squier and Gibson’s Epiphone can get away with tricks like this and their customers don’t seem to complain that much.

Naturally, I’m removing all the tuners and drilling two extra holes for each and screwing each tuner key in with four screws, because I only sell good guitars! 🙂

The strap buttons were screwed in tight and securely, but two of the bridge screws had stripped in the soft wood of the body, so I’m reinforcing those with specialized hardwood shims otherwise known as “toothpicks” 🙂 and Titebond. While the bridge and saddles are off, I’ll dump them into my hydrosonic jewelry cleaner for a super-cleaning. Check out the bottom photo to see how shiny and clean they come out.

Someone had already dressed the fret ends and they did a good job. Neck angle was good; pickup heights were good/ jack was tight and everything else checked out ok.

If you use steel wool to clean your frets and fretboard, be sure and tape your pickups to protect from bits of steel wool being attracted to the magnetic poles. I wipe the filings off the fretboard with a paper towel, then collect the rest with a strong magnet before removing the tape.

I found one more example of Squier’s cheapness – cheap screws. The screw that held the string guide had broken in half so only the top half of the screw was holding it. When I tuned the strings, it popped off! So I drilled a new hole a bit below the old one and used a new screw.