Squier Strat Gets Checked Out & Setup 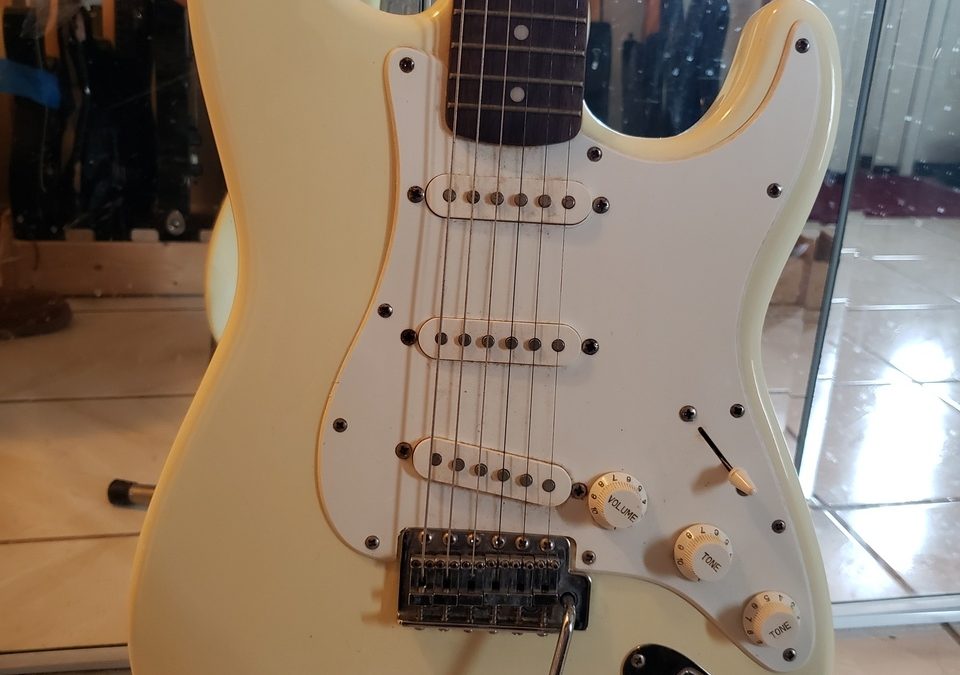 I love ivory Strats! And this one looked like it would be an easy prep and setup to resell. But I was in for a surprise and it shouldn’t have been a surprise!

The rusty strings and pickup poles and the general dirt and crud told a story of a guitar that had been neglected and improperly stored for a long while. (Why don’t sellers at least wipe the dirt off before selling a guitar?) But the neck and frets looked good and everything else is an easy fix. Right? Let’s find out.

I always begin with a cusrory overall inspection and noted a “finish crack” at the neck pocket. Those are fairly common and generally harmless. (We’ll return to this subject shortly). BTW, the crack looked better before I “touched it up” – I’m still working on my finishing skills. (Or rather, my complete lack of them!)

I also noted the extreme float at the bridge. This is the main reason that string height was at tomato-slicing height!

Then I tune the guitar so that I’ll have the correct string tension when checking relief, string height, etc. I have a digital tuner that I use when background noise, or conversations with customers, negate my tuner app, but I prefer the app (Pro-Guitar Tuner for Android and IOS) and it agrees with my digital within 2¢.

The nut slot heights checked out at about 0.020″ for E through G and a tad below that for the rest, but none below 0.015″ – so the nut slots were surprisingly good. (Measured while fretting at the highest [last] fret). Most new guitars (and therefore used guitars also) have nut slots cut high and need filing before the guitar will ever come close to proper intonation in the cowboy frets.

After first clipping a capo at the first fret, I fretted E at the highest (last fret) fret and measured relief – the gap between the bottom of the string and the top of the 7th fret.

it takes good lighting and the right sighting angle to take this measurement – it takes sharp eyes too.

In this case, being distracted with trying to take this photo, I didn’t notice that the measurement was close to 0.040″ and I should have slid the rule leftward so that 0.040″ was over the 7th fret. (See photo below.)

Thankfully I caught my error (that it was not 0.020″) and with a 4mm allen wrench, adjusted the relief to 0.010″, retuned and rechecked. Once I figure out how to use 3d cad software, I’ll be making sets of “Go-NoGo” feeler gauges to make measuring between strings and frets more accurate and error-free, and I’ll offer them on our new website – GuitarFlipper.com (not quite ready for prime-time yet!)

Make no mistake – 0.040″ is pretty far out of whack. Once you have much of a bow in the neck, the strings have even more leverage on the headstock to increase the bow ever faster. It may not take too long before the neck is warped too far for the truss rod to be able to correct it. In this case, about half a turn on the truss nut got me down to specs without having to apply a lot of torque.

Next, and with the capo still on the first fret, I measure string heights (saddle adjustment) at the 17th fret (12th for LP styles & acoustics). These strings are painfully high, but much of that will be fixed when we either deck the bridge or properly float it with about a 3/32″ float. We’ll adjust the rest with the 1/16″ allen set screws in each saddle.

I’m only showing the E string measurement, but of course we’ll set each string individually when we get to that point. Right now, I’m mostly just getting an idea of the current status of the guitar. It’s important to note that we need to adjust the relief before we measure the string heights. Adjusting saddles before setting the relief adjustment is meaningless.

Back to the Crack

Back to our “innocent little finish crack” – well, it went just a bit deeper than most! Thankfully, the crack was just wide enough that I didn’t have to resort to heating messy hide glue. Titebond III was thin enough to be worked into the crack which I widened a bit more with some force, then clamped the body to close the crack back up, and set it aside until tomorrow.

It looks like someone used this guitar as a weapon or tried to smash it like you could an acoustic or electric semi-hollow. ** <– BS! There are no external marks to indicate that this guitar met any sort of trauma at all. The neck was so tightly set into the pocket that over time, the continued extreme stress coupled with temperature and humidity changes is what likely caused this cracking.

Honestly, the guitar would play just fine without doing anything to this crack. I doubt it would affect tone, sustain – or even grow larger, because these bodies are solid, thick (1-1/2″ to 1-3/4″ ) and very stiff. But why take chances that the crack might grow? Titebond will make this section stronger than before it cracked, and gives peace of mind about future issues.

Well, I gotta give the glue time to setup, so we’ll come back to the guitar tomorrow.. And that’s when I’ll finish this post – Maňana! See you then!

Well, it’s “tomorrow” and the Titebond had seeped into the tightest areas of the crack and has done its job. However, there is still an opening on both sides and I can get a thin feeler gauge to go in a ways before hitting the areas brought together and bonded with Titebond. So, I worked some epoxy down into the crack to fill and create a tighter bond. I then waited for the epoxy to set, cleaned out the pocket, filed down the burrs from the screw holes in the neck and reinstalled the neck.

Now, I want to do a bit of cleaning up before getting back into the setup side of things. Let’s start with that headstock. I removed the two string trees (guides) and I don’t intend to reinstall them. These are the biggest source of friction and therefore tuning stability issues in the entire guitar design. We’ll replace them with roller guides just like Fender puts on their American-made guitars.

I used Walmart’s “Nu-Finish” car polish to clean the headstock, and we’ll use it later on the guitar body as well. The combination of liquid and grit is great for removing crud from the pores in the wood.

While we’re here, let’s check those 10mm tuner key nuts. They’re always loose. But don’t overtighten. The threaded part of the tuner keys will break easily if you turn that wrench a bit too much.

The Fender-style roller guides, come with a guide stud which requires a second hole to be drilled for each guide.

I suppose the thought is to keep the guide aligned with the strings. But wait – string tension alone will do that and what if I drill that hole just a bit out of line? The guide will be angled; look stupid and add friction where none is wanted.

So, let’s override those Fender engineers and snip that little stud off. We’ll need to grind the base of the roller guides flat afterward, and now we can install without drilling more holes.

Next, we’ll clean the frets and fretboard with Naptha (available on Amazon) and #0000 steel wool (Amazon). The little fan you see (also Amazon) will keep the fumes away. We don’t want to be inhaling this stuff! If I hadn’t already removed the pickups, I would cover the neck pickup with painters tape before hauling out the steel wool.

I wiped the Naptha off with a paper towel. I would never use a rag because rags get reused and I don’t want those little steel wool bits anywhere around my bench. After tossing the paper towel, I used a strong magnet to police up any remaining steel wool debris.

You can use naval jelly, then wipe with WD40, to remove and prevent future rust, but you’re not going to replace the plating so easily. Since pitted pickups are going to play just as well as new ones, we’re dealing with an aesthetics issue, not a functional issue.

I see only two choices – cover up or replace. If you can find single coil pickup covers without holes for pole pieces – go for it. But they won’t work with staggerd poles. If you use a solid cover on staggerd pole pickups, it’s likely to wobble and your strings will be too far from the lower poles – and that IS a functional issue.

So what to do? Sell either the loaded pickguard or the three pickups separately to people who don’t care about looks and apply the money to new pickups or loaded pickguard.

In my area, I see people selling used Squier loaded pickguards for the same or more money than I can buy a new import set, and I like the imports just fine!

To remove the film from a new pickguard cleanly, it’s best to remove the control knobs. This is facilitated by a couple of stiff picks and, if needed, a small flat-head screwdriver carefully prying on either side.

The new pickguard holes almost never match the old holes but are often close enough that the screws may break through into the old holes. Best practice is to use “specialized dowels” (i.e.: toothpicks) and Titebond to fill the old holes.

I dip the toothpick in the glue, wipe excess, then press all the way to the bottom of the hole, then pull back out about 1/8″ and snip with dykes. Then, using the remaining toothpick end, I press the piece back down into the hole. Be sure that it’s flush or a little below the surface of the guitar body.

The new, loaded pickguard has three wires to connect – one hot (to the jack); one negative (to the jack) and another negative that solders to the trem claw to ground the bridge.

Lastly, I strung the guitar after coating each string with a very light coat of 3-in-1 oil (it’s humid here in Florida!). To float the deck requires balancing tension between the tremolo springs and the guitar strings. So we’re flipping the guitar over from time to time. I feel it’s important to protect the frets when you turn a guitar over that has strings. A cardboard envelope from the new strings is a handy way to do this.

Now, it’s ready to make some guitar player a proud owner of a new acquisition!

(Stay tuned, I’m not done with this article yet..) I finally finished!