How to ReString Your Guitar 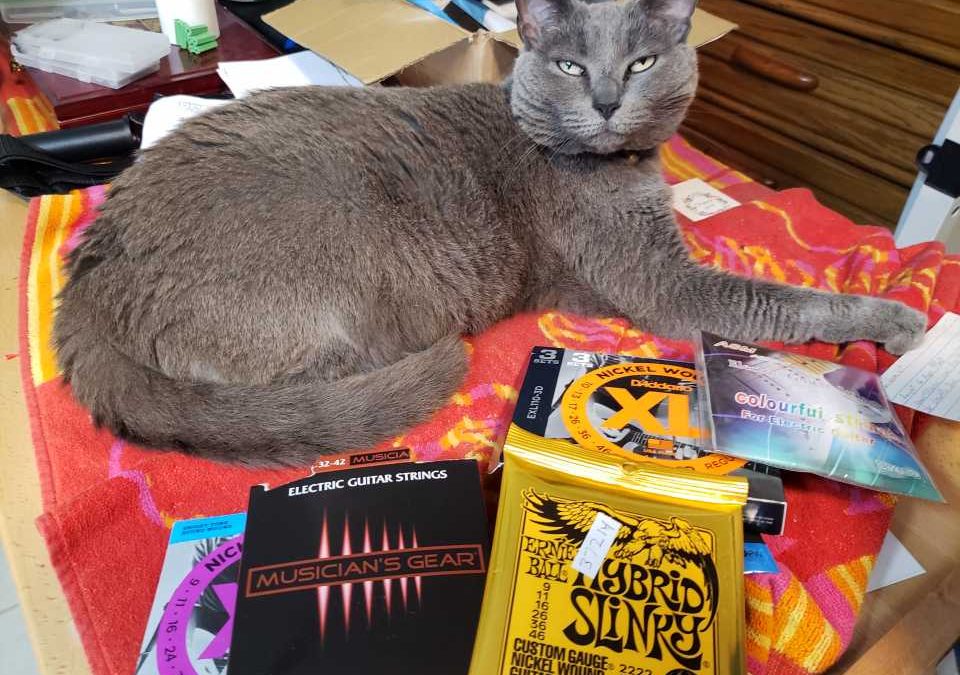 I hate taking money from people needlessly. Some of the worst cases are families, often single parents not exactly in the highest income brackets, bringing me their child’s $99 guitar for a $25 restring.

It gets even worse when they bring me a $18 set of guitar strings that their guitar instructor insisted upon!

Rule #1: Your child does not need top-dollar guitar strings for their guitar lessons. Period. Full-stop.

Rule #2: Restringing is a DIY job! Yes, I do offer restring services, but I’d rather show you how than take your money.

I’m breaking these articles down by instrument type. Stringing a guitar is a bit different depending on whether the guitar is classical or other acoustic, hardtail electric, Fender-type tremolo electric, Floyd-Rose type electric, etc.

I’ll begin with the simplest. If I haven’t written an article that covers your instrument type yet, this may do –

How to String Hardtail Electric Guitars

A “hardtail” bridge is simply one that is not moveable; has no tremolo. Any brand of ball-end, nickel-plated guitar strings for electric guitars will do, usually in the range of $4 to $7 for a set of 6. Guitar strings come in a variety of sizes. Most beginners (and many pros) prefer #9’s. The number stands for the diameter, in thousandths of an inch, of the highest (thinnest) string.

A set of nines generally ranges from 0.009″ for the high-e string to 0.042″ for the low-E string. Do not buy hybrid strings that range from 9 to 46 unless your guitar tech has ensured that nut slots are wide enough to accept those wide, wound strings.

This goes for a set of tens as well. Most Fender style (and many Epiphones, etc.) are made for nines. If you install strings of a larger gauge, you will likely incur binding in the nut slots, especially at E & A. (The “nut” is the thing with slots for strings that is at the headstock (where the tuner keys are) end of the guitar neck.

It is perfectly alright, however to put nines in a guitar meant for tens. So, when in doubt – and especially with beginners’ tender fingers, go with nines.

If you live in a humid area, like I do, you may want to put a few drops of 3-in-1 oil on a rag, work it into the rag, then wipe down each string with the oil part followed by a dry part of the rag in a “wipe-on, wipe-off” motion. Inspect each string, especially around the ball-end, for defects.

The tuner key closest to the nut on the top-side of the guitar (when held in playing position) is for the low-E string. Turn the key until the holes are perpendicular to the neck, then thread the string through the inside hole. (The hole not facing the closest outer edge of the headstock). How much string should you pull through?

You want at least 2, maybe 3 windings for your wound strings (strings with a coil of wire wrapped around the core – generally E; A & D). On many guitars it will be important to get 3 windings on E and A to ensure the proper downward string angle from the nut. Insufficient angle can affect tone and even cause buzzing. On the other hand, you don’t want the string to overlap itself in the tuning key post. Also, excess string could cause tuning stability issues.

On vintage guitars with tuners that have a string hole in the top, rather than using my hand to measure, I just pull the string tight and cut it where it meets the 2nd post past the current post, or if there aren’t two posts left, pinch the string at the current post then slide it back so you can measure for two posts further and cut.

If your guitar has locking tuner keys, refer to your manufacturer’s instructions. (You can probably Google them online if you’ve lost the paper version)

With the string length set, bend sharp angles at the tuner key to help prevent slippage. Next, cut the string so roughly a quarter inch (6mm) extends, as in the next photo..

While keeping tension on the string so you get tight winds, turn the tuner key so that this post turns counter-clockwise, until there is enough tension on the string to take the curve out without using your hand to pull but not enough to tune to pitch yet. BUT – be sure and look back toward the bridge to make sure the string hasn’t looped around a pickup or switch, etc., that could break if you tighten the string like that.

If you have a Gibson-style (3×3) headstock with 3 tuner keys on each side, when you’ve finished the top side (E; A & D), start with the “e” (#1) string on the other side, then #2 & #3 (B & G). Note that the strings always enter the tuner post from the inside (center of the headstock). On 3×3 tuners, the strings will wind onto the posts clockwise (opposite of the top side tuner posts which wind counter clockwise). So strings always come from the center of the headstock and wrap over the top of the tuner posts.

On the unwound (single-strand) strings, many people like to do an extra winding on the post by having the first wind go above the string hole and the others below the hole, thus “pinching” the string, supposedly to prevent slippage.

This is how I was taught and it’s the way I still do them, but I’ll admit I’ve never witnessed any problems with strings that were not wound with the first wind above and I doubt it’s even an issue.

Once all six strings have been installed, clip the string ends as short as possible to prevent future “ouches”.

How to Tune Your New Guitar Strings

Begin with your high-e (thinnest) string and tune it to “C-4” (Don’t fret – we’ll get it to e-4). You should use a tuner that shows not just the note, but also which octave you are in. The notes for each octave are – C-D-E-F-G-A-B and then they repeat. If you want to tune to e-4 and don’t realize you’re in the 5th octave, you’re likely to break that e string!

Guitar tuner apps are plentiful and generally free. I recommend “Guitar Tuna” (yeah, like the fish). The reason we’re not going to tune your thinnest string to it’s pitch right away is that we want to keep tension on the neck relatively level and we don’t want to be doing major work with the thinnest string.

Then start over and tune the high-e to D#; B to A# and the rest of the strings to their respective pitches. Finally, go back and tune e and B.

On these first few rounds of stretching and tuning, don’t be concerned if you tune a string a little bit sharp. You’ll pull it out in a bit, with the stretching. But when you get down to a string’s final stretching, always “tune up”, never down.

This means you want to tune the string up to pitch, not down to pitch. So if you go a bit sharp, loosen the string so that it’s a bit flat then tune it carefully up to it’s proper pitch.

How to Stretch Guitar Strings

Don’t pat yourself on the back just yet! You have only just begun!! There is a laborious, boring process known as “stretching the strings” to be endured!

This is where many guitarists drop the ball and end up thinking their guitar “won’t hold tune” or imagine a wide range of other problems all due to improperly stretched strings.

With your finger at about the 12th fret, push the high-e string until it almost touches the G string. Feel that tension?

Keep that feeling of tension in mind as you go through each string, up and down from the bridge to the nut stretching each string, every couple of inches, evenly along the way. As you reach the end of the string at the nut, continue stretching back down to the bridge. Then, retune the string and start on the next string.

When you’ve finished all six strings, you are rewarded with the privilege of starting all over again. Somewhere between the third and fourth time, the high-e string and B-string will not have changed tune more than 2 cents, if at all. You are done with those, but keep cycling through G through E a few more times until each string barely budges off tune after its stretching.

Remember to “tune UP” not down.

After a few hours, or overnight, some strings will have “stolen back” some of their stretch and will now be sharp. I generally just restretch them until they’re in tune again. But if they steal the stretch again, I’d just detune (loosen so that it’s a bit flat) then tune to pitch.

Congratulations – You’ve successfully restrung and tuned your guitar by yourself and I didn’t have to do it! Now, you can merely mail me the $25! LOL!

At the end of this series (after we’ve restrung various styles of guitars) remind me to cover intonation.

Until next time – Keep on strummin’!