Used Guitar Shopping on the Cheap 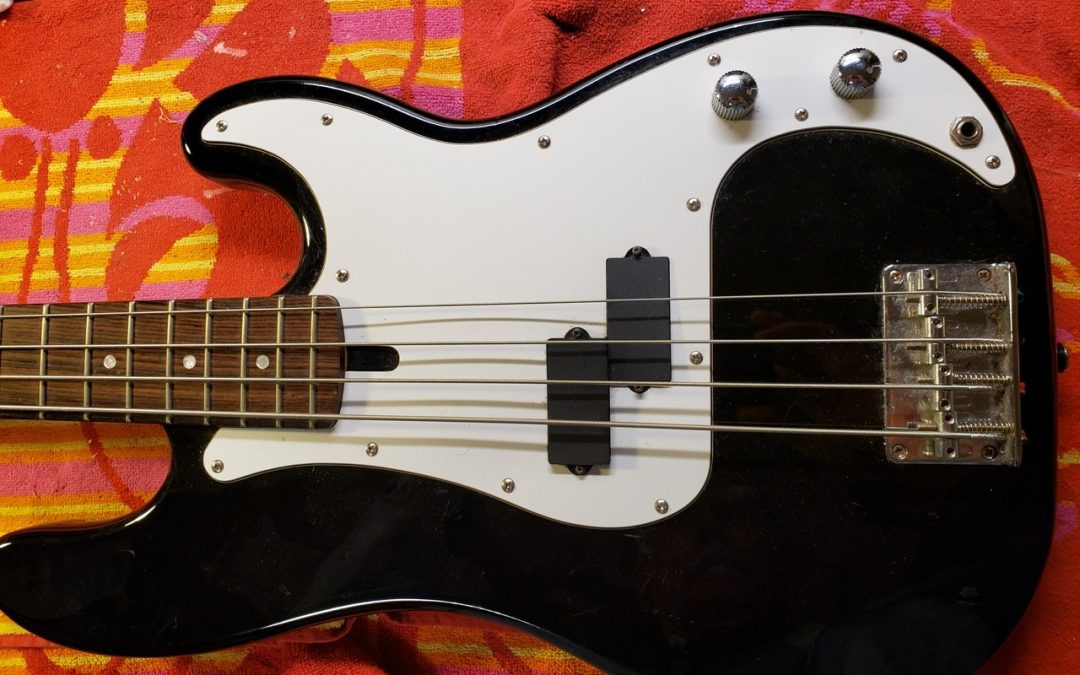 I’d posted a bass guitar on Marketplace for $120. I’d checked it out end to end, checked every fret for level from E to G then polished the frets with rouge and a dremel tool; filed nut slots down to spec (they’re always too high), set the reliefRefers to a bow in the guitar neck intended to allow strings... and verified the truss rod and truss rod nut were good.

After cleaning and polishing, I installed, stretched and tuned a new set of good strings; set string height to specs, then set intonationIntonation refers to being able to get the correct note on e....

Finally, I took photos and posted the ad online. One of the responses to that ad was from a fellow offering $90, which was $30 less than the $120 asking price and just $15 over what I’d paid for the guitar, not counting the new strings.

Now, here’s how I feel about “haggling”. If it’s a vintage guitar with collector value, we can certainly debate the value. If it’s an expensive guitar, say $1500 or something, maybe there’s fifty dollars or so of “room”. But if I’m selling a guitar in the neighborhood of $100 – a guitar I’ve done a $60 setupA "setup" is vital to a properly playing guitar. on (I setupA "setup" is vital to a properly playing guitar. every guitar before selling) and put new strings on, etc. My purpose is to provide the best guitar possible at the lowest price I can. I’m not trying to “rip off” anyone, so I don’t pack extra profit into my price – I’m selling as low as I can so I can buy another and “play” with it.

Naturally, I declined the offer. He countered with $100. I declined. Two days later, I got a message from the same person, asking if he could bring a guitar for me to look at. I said “Sure.”

Well, he’d bought the bass guitar in these photos, and it was buzzing “a bit” and wanted to know how much I’d charge to fix it.

I looked it over (filthy!) and saw that there was zero reliefRefers to a bow in the guitar neck intended to allow strings.... In fact, there was a slight back bow, and string height was about right – for a Strat, not for a bass!

With a flashlight, I looked into the truss rod hole and saw metal shavings and a partially rounded hex screw. Some pickup adjustment screws were way out but the pickup was still too low, which indicated that the underlying foam needed replacing.

The nut slots were cut way too low so that no matter if everything else was fine, open strings would buzz on the first fret, and the nut was chipped and needed replacing.

Too bad. The guitar looked nice otherwise. I had to tell the guy that a setupA "setup" is vital to a properly playing guitar. ($60) plus the price of a nut would have covered everything and ended up with him having a decent guitar if not for the truss rod issue.

If the nut or threads were stripped, there would be extra charges for extraction and replacement and if the nut couldn’t be removed due to stripped threads, the guitar was not likely worth repairing.

With that, he said, “I should have listened to you, but I thought if I couldn’t haggle the price down, I wouldn’t be getting a good deal.”

He said he paid $100 for this guitar. Now, he was looking at about another $100 to make it playable with a big chance that it couldn’t be fixed at all.

I did get the truss nut to turn but the threads were stripped and it could not be removed. That did remove much of the stress on the neck and a less scrupulous dealer could make it play ok and sell the guitar, but the next time it needed adjustment, the buyer would be out of luck. I will not sell the guitar with this neck.

I’ll have to replace the neck but I can use this one for a practice neck for when I want to try and remove the fretboard and replace the truss rod.

So, I didn’t come out so good either. I got some $10 tuner keys (wholesale value), $10 pickups and another body (I’m accumulating a box full of guitar bodies!) worth about zero to me, but let’s say $20 value – a break even deal if I ever need the body.

But I did gain a customer who is likely to refer people to me in the future.

Used guitars are not commodities. Not all guitars of a certain make, model and year are worth the same. Condition is a HUGE factor. Brand-new guitars on the shelves need a setupA "setup" is vital to a properly playing guitar. and 96% of them won’t get one. Things can only go downhill from there.

Why buy a guitar that is uncomfortable to play, won’t play right and will never give the right notes fretted up and down the fretboard?

The moral of this story, kids – is if you encounter an old man who refurbishes instruments just for the love of the instruments and because he prefers to see people playing or learning on decent guitars, if he’s willing to stand behind the guitar; the guitar plays great and the price looks fair – it just might be a better deal than the “great deal” garage sale guitars out there! 🙂

Later, I decided to remove the fretboard and repair or replace the truss rod and/or nut. Everything went well and I’m about to reattach the neck and setupA "setup" is vital to a properly playing guitar. the guitar.

I used the tools shown in the above photo plus a heat gun. I used an Exacto knife and the saw shown at top, to get things going, but my main tool was the wedged knife (brown wood handle) on the right.

I would get it very hot with the heat gun and warm the neck pretty well also, then using one hand on the handle and one gloved hand on the end of the blade, I worked the knife another inch or so down the fretboard – rinse and repeat.

The entire process probably took half an hour or so. Once it was out, it was easy to remove the stripped nut. I used a tap and die set to fix the threads on the rod, then replaced the stripped nut.

When finished, I sanded the neck and fretboard clean where their surfaces meet and set the truss rod back into its slot, making sure to protect it with tape from the Titebond III glue.

I regret that I didn’t remember to use a couple of staple ends or thin brad pieces to keep the fretboard from sliding during the clamping process, but it moved very slightly and some #120 should clean up the edges.

I’ll add photos of the finished job when I’ve reassembled and setupA "setup" is vital to a properly playing guitar. the guitar.