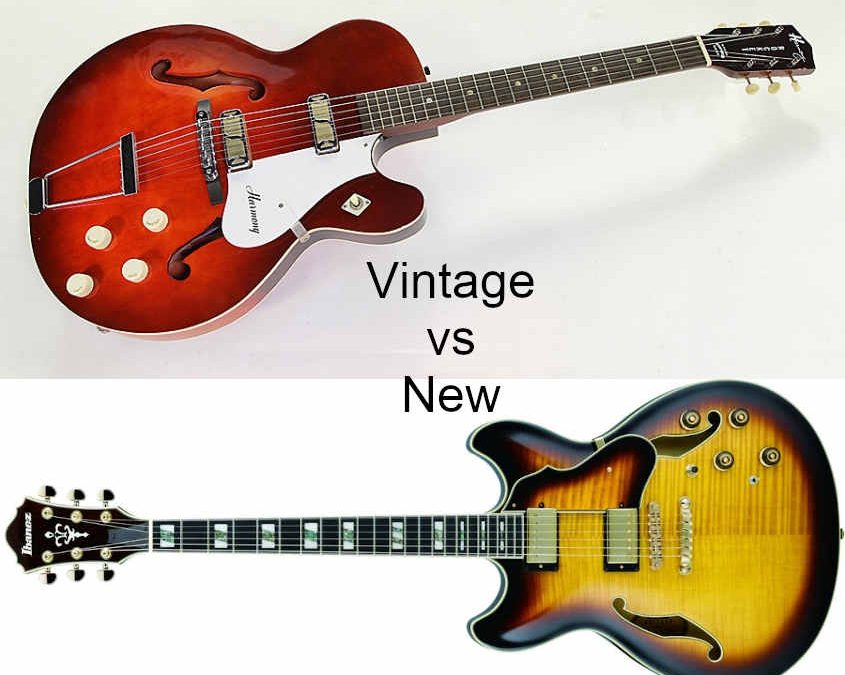 Are vintage guitars really better than new guitars? Is it hype or is it real?

I began wondering after reading this..

“My Harmony Meteor kicks the s**t out of everything. I know I’m gonna be able to hold my own because this guitar, it’s just got me”

But is Madi’s confidence actually from the awesome sound and playability of the Harmony Rocket, or is this a placebo effect based on the “vintage myth”?

And why should we, as guitarists, even care? As the brother of a classical violinist, I can assure you that they are the cork-sniffiest musicians of all time!

So let’s let violins be proxies for a scientific comparison of vintage guitars vs new guitars..

A study published June 2021 said, “Investigations into Stradivari violins have mostly focused on the geometry and varnish compositions, but copying these attributes seems insufficient to reproduce their unique playing qualities.”

I think it’s important to add that the authors were specifically discussing vibrations emanating from the violin’s soundboard. Despite what you may have heard from Paul Reed Smith, solid body guitars don’t actually have vibrating soundboards and therefore “tonewood” is irrelevant and immaterial to guitars such as Stratocasters, Les Pauls, Telecasters, etc.

But wait! Is it the steak (wood) or the steak sauce (varnish)?

According to ARS Technica, 9/16/2021 (click to read Stradivarius article), at least, in their headline, the “superior sound” of a Stradivari violin is due not merely to the instrument’s geometry but mostly to the varnish and chemicals used to soak the wood.

But before you start slapping varnish over your D’Angelico semi-hollow guitar, read on..

In fact, what would several blindfolded professional violinists think when handed several brand-new violins and several vintage instruments from the “Age of Violins”, in random order?

What’s your guess? Are the multi-million dollar Strads worth the money as a playable instrument, or merely as mythical “vintage instruments”?

The experiment took advantage of the fine violinists, violin-makers, and violins gathered in September 2010 for the Eighth International Violin Competition of Indianapolis (IVCI), one of the most important international violin-playing competitions.

Six instruments were assembled: three new and three old. The new violins (N1, N2, and N3) were each by a different maker and were between several days and several years old.

They were chosen from a pool of violins assembled by the authors, who then selected the three that they felt (i) had the most impressive playing qualities and (ii) contrasted with each other in terms of character of sound. One was a Stradivari model; two were Guarneri models.

Subjects rated new violins significantly more highly (P < 0.02) than old ones for playability and response, but no significant difference was seen for projection (P = 0.62) and tone colors (P = 0.08), so that uncertainty remains (SI Text). Asked about the making-school of their take-home instruments, 17 subjects responded: 7 said they had no idea, 7 guessed wrongly (i.e., that a new violin was old or vice-versa), and just 3 guessed correctly (SI Text). In light of this result, Langhoff’s assertion becomes difficult to sustain, as does the case for special playing qualities unique to old Italian violins.

So why should a guitar, sold through mid-century department stores, in an age when even most aircraft machining tolerances were often less than tolerances of today’s guitar-making CNC machines, be considered better than modern guitars?

Why should a guitar, thought of as mediocre sixty years ago, now be held in high esteem? Misinformation and mystique make fertile ground for marketers to exploit. (You can tell I don’t have a Harmony Rocket to sell!)

The truth is, I’d still really love to have a Harmony Rocket or Meteor. But I know it won’t play as well as my Ibanez AS83.