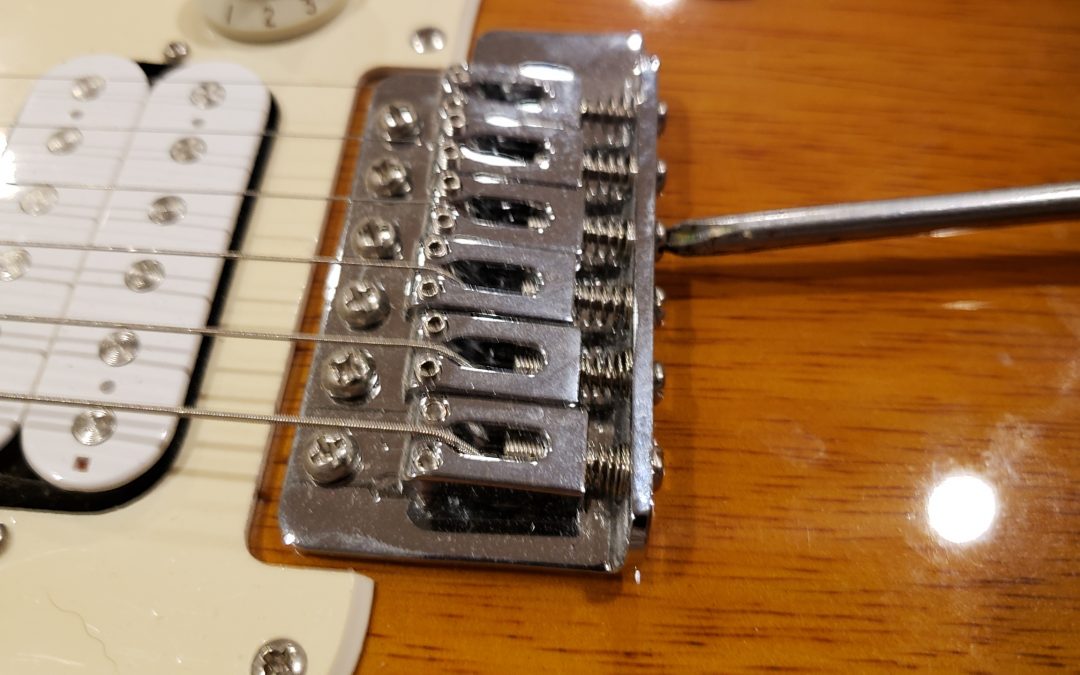 “What is Intonation? and How Critical is it?”

The person asking me these questions is an experienced band leader, guitarist, bassist and vocalist. Frankly, I was surprised that they weren’t intimately familiar with intonation, since it is absolutely critcal to all guitar players and it’s something that needs frequent attention.

Well, how upset would you be if, when you played a “G” from the 3rd fret on the hi-E, you got a G# instead?

That’s a half-tone off. And an “F” played on the 1st fret could be even further out of tune. Yet, this often happens when an inexpensive electric guitar is “properly” intonated at the 12th fret!

When buying a used guitar of Craigslist, etc., or even new off the shelf, don’t expect it to be “properly intonated” to anyone’s specifications! I often have to move the bridge saddles more than an eight of an inch to get intonation set, which is a whole tone or more. That means there is no way anybody could have properly played any chord or any melody on that guitar!

The guitar is a rather inprecise instrument, so compromises must be made in regards to tuning at various points along the fretboard.

When you set intonation from the 12th fret you should get a note that is precisely one octave higher than the open-string, because the 12th fret is exactly half the scale length. But the guitar is not a precise instrument, and the further away you are from the fret where intonation has been set, the more likely the tuning could be off.

Fender specs call for strings to clear the 1st fret by no more than 0.02 inches (two one-hundredths of an inch), yet many of the inexpensive (less than $500) guitars I see have clearances more than double that, and most are well above it!

This means that fretted notes are likely to be out of tune (sharp) if you’re tuning open strings, especially things like open chords played in the first half-dozen frets past the nut.

When setting up for a professional, I can generally just set intonation by the 12th fret and all is well including the first several frets past the nut, because pros play professional instruments buit to higher standards. But, this usually isn’t true for a less expensive guitar for an inexperienced player.

Guitars costing only a couple hundred dollars will generally have nuts cut too high and tuners that may not hold tuning as well as better guitars. This, and a few other factors, mean that any “off-tuning” at the first several frets will probably soon be magnified as the tuners fail to hold their settings and the inexperienced player will either be unaware of the issue and blame things on his poor playing or he may become frustrated by having to constantly fiddle with tuning.

Neither situation is ideal. So how should we handle the situation? Ideally, recut or replace the nut and set all clearances according to factory specs. This is what I generally do with Squier guitars that I buy to resell.

I recently purchased the $82 nut file set from Stew Mac, so I don’t have to replace so many nuts.

But if your just working on your own $100 guitar, it’s hard to justify an $82 tool. In these cases, find the best compromise for the first 12 frets.

(Somebody emailed me to say they watched a YouTube video of a “pro” setting saddle height to match radius and that this “pro” used the radius guage on top of the strings instead of under the strings as I do. The inference was that I was doing it wrong. NOPE! This is another instance where you can’t believe everything you see on the internet. Due the strings having different diameters and because what we’re really concerned with is distance from the bottom of the strings to the top of the frets, the guage must be used under the strings, not on top. You can quote me on that!)

If trying to do your own intonation, you should understand that intonation is the last in a series of steps that are taken during a guitar setup. Nut and string heights need to be adjusted, neck alignment, truss rod, etc., and the saddle heights must match the radius of the fretboard.

This is time-consuming, especially if you don’t do it everyday and is the reason that most guitarists take their instruments to a pro. But if you’re certain that all else is in order (which is almost guaranteed to not be true when buying a used guitar!), then you can adjust intonation yourself by adjusting string length via the adjustment screws on your bridge saddles.

Or, just call your local pro and let them do the job professionally. If you’re near Palm Harbor, check my rates and services under the “Services” menu at the top of this page .  I can often do the job by the next day.

One quick tip – don’t do like the photo in this article – place a rag or painter’s tape behind the bridge to protect the finish in case your screwdriver slips.  (Don’t ask how I know!)