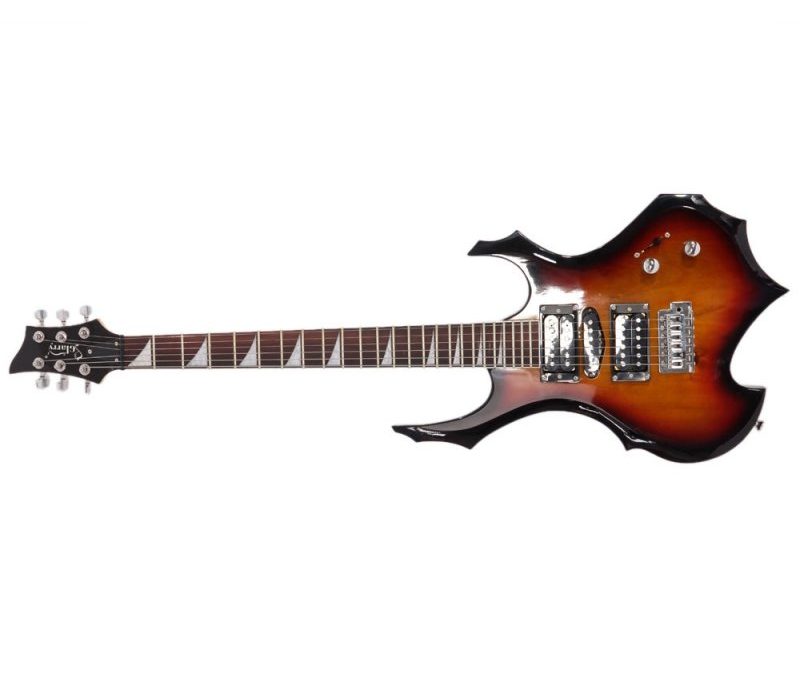 So you’re thinking of getting a cheap guitar for yourself or a gift? Sure, there are Fender Squiers and Gibson Epiphones in the $200 range, but there are Glarry’s like this one for just $85.99!

My answer isn’t a simple one, unless you just want a wall-hanger. In that case, by all means, go for it.

But if you’re thinking of actually trying to play the guitar, follow along with me as I unbox a Glarry “Burning Fire Style Electric Guitar”, and check it out.

I contacted Glarry about the damage (forgot to mention the missing accessories though) and I requested either a return or a 50% refund. They issued the refund the very next day.

So now, I have a $43 guitar and I don’t mind having to repair the body. Now, let’s move on to more important issues – playability issues..

Pickups being twice as far from the strings as they should be, mean that the sound won’t have the volume or clarity it should have.

Neck relief is three times what it should be. This means that the already too high strings (measured at #17) will be even higher in the middle frets. Simply put, this translates to having a much harder time controlling the chords and notes and having sore fingers much sooner than normal.

String height is almost double what it should be. Fretting notes and chords will be very difficult – especially for beginners and your finger tips are going to HURT!

The high nut slotted strings will play sharp when fretted in the first five or so frets. The lowest will likely make a buzzing noise when played unfretted.

In short, problems like these are the cause of many thousands of beginners giving up on guitar. A cheap guitar can be enticing – especially a pretty guitar like the Glarry line. But here’s what most people don’t know – every new guitar needs a setup. But a cheap new guitar REALLY needs a setup!

I’ve setup brand-new Glarry’s, Harley Benton’s, Squiers, Epiphones – you name it. In general, the cheaper the guitar, the more it’s likely to require a setup to be playable.

Don’t buy a cheap guitar if you’re worried about finish imperfections! These guitars are full of finish flaws. Pic on left shows one on the body top, but there are problems around the edges of the headstock and nearly any place you look closely. Still, it’s a pretty guitar at arms length.

The back of the neck is totally unfinished and is likely to quickly look dirty due to sweaty hands, dust, etc. A few coats of Tru-Oil would help here.

No sharp fret ends stuck out – which is a pleasant surprise in a guitar in this price range. The truss nut was way loose! I don’t doubt that the 0.030″ that I measured would quickly increase. The greater it gets, the more leverage the strings have on the headstock and the faster the relief grows!

It’s a self-feeding loop that could warp a neck and making this guitar not worth repair. I wouldn’t be surprised to see this happen in just a year or two if the truss nut isn’t snugged up from the beginning.

One last critique I’ll give this Glarry guitar is that it doesn’t seem like any attempt to stretch the strings was made at all. Many beginners don’t understand how much stretching is needed and may just think that this guitar will not stay in tune.

Just one moderate bit of stretching along the low-E string dropped it from E to B! Imagine how quickly it would have dropped out of tune just by playing one song!

A hundred bucks or so on a guitar plus forty or sixty for a setup, is still a good deal. Without the setup – it’s a bit like ordering a cup of soup and getting a frieze dried pack of meat and noodles, but never adding water and stirring the pot!

Know that fret material is likely to be softer than more expensive guitars, meaning you might be needing a new fret job in a year or two – which, for this guitar, is not worth doing.

Know that screws are cheap and saddle height screws, intonation screws, etc. may not hold their settings well.

Surprisingly, these tuner keys – a common problem with cheap guitars – felt pretty good and I had no problem tuning the guitar.

SPECIAL OFFER: Though I’ve stopped taking service work for new customers, I’ll make an exception with Christmas around the corner, I’ll offer $25 setups while-you-wait, for brand-new guitars from now through January. This will cover all the items in the table above, but will not cover installing new strings, checking fret levels or cleaning electronics (which shouldn’t be needed for new electronics).

I will include smoothing fret ends if you waive any concerns about scuffing or scratching that can occur from sandpaper and file marks.