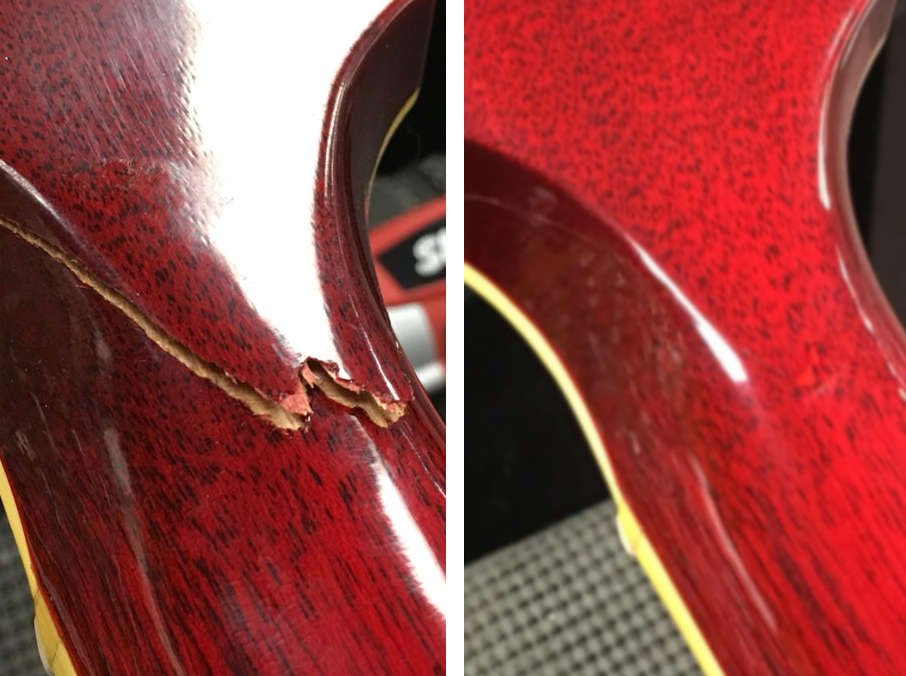 So, last week’s episode didn’t dissuade you and you’re back shopping for a guitar, eh? How ’bout that beautiful Epiphone Bonamassa that’s advertised at just over half the price they usually go for?

Just one little problem – no strings. Shucks, a set of strings is only six bucks – better hurry and grab this great deal before anyone else does!

This is a true story – kinda. Actually, I’m blending several nightmare guitar buys into one, which I’ll explain later.

OK, so you meet with the buyer, and sure enough, the guitar is as beautiful and “pristine” as advertised. You hurriedly cram the $600 into the seller’s outstretched hand and rush home to string up your new “baby”.

You’ve got your new D’Addario strings installed and now you’re tuning them up. But something strange is happening. Just as you get within a half tone of tuning, it drops a full tone down. OK, string must’ve slipped on the Bigsby(?)

You try tuning again, but the same thing happens. When you glance at the headstock, it’s at a different angle – it’s rising up!

The seller had removed the strings, relieving the tension, so that the headstock crack would close naturally. The break was (as they so often are) so clean, it closed up tightly and to outward appearances, all seemed right.

The seller’s going to swear that the guitar was fine when he handed it to you and you must’ve broken it. How do you prove him wrong?

You can probably get it fixed easily enough, but will it ever look “new” again? And even if you spend a fortune to hire someone good enough to make it look like new – it’s still a guitar with a repaired headstock and the only proper way to sell it is to make that clear in your ad, causing its value to take a huge hit.

The TRUE Bonamassa story? This story featured a Bonamassa I bought, but in truth, the details generically matched several other buys I made.

The Bonamassa was different because it DID have strings when I bought it. But I met the seller in a dim parking lot and failed to notice the tiny sliver of a crack that ran along the edge of the fretboard.

This break was different from most because the string tension actually helped close the crack to where it was nearly invisible. Since there was no break on the back of the neck, running my fingernail up the back of the neck to the headstock, didn’t catch anything.

The guitar actually tuned up fine even before I repaired it. But it’s still a guitar with a repaired headstock. The repair is great and it will last forever, but the value of the guitar is greatly dented.

I was willing to settle for a partial refund of $100 (I paid $650), but the seller was nasty and totally uncooperative. I see they’re still selling used guitars on Facebook, Craigslist, etc. Beware!

Stay tuned for next week’s episode. What danger will we discover in our next guitar “find”?