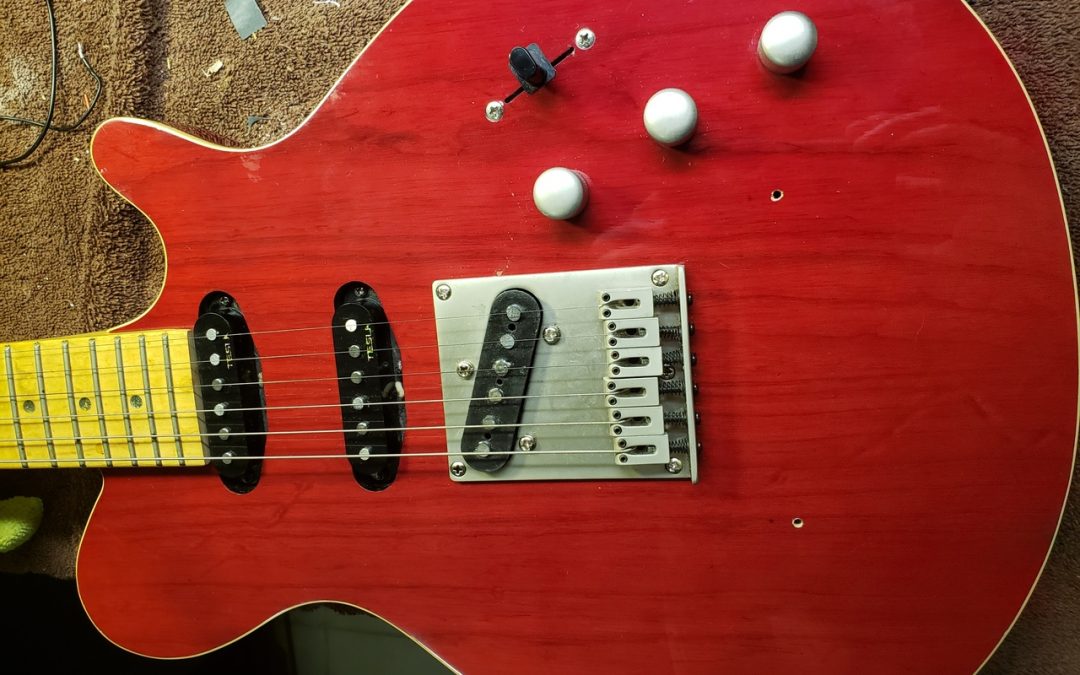 Another in my series of Craigslist guitars and my unsuccessful quest to buy one that is truly ready to play and worthy of selling to one of my customers..

I grabbed this guitar from the rack because I thought it looked pretty good and wouldn’t take much work to get ready, and I was right, but.. When I picked it up to play, I had second thoughts.

All the pickups, controls and selector switch worked fine, but it had very high action and was uncomfortable to play. I’d almost say “unplayable”! I looked closer and saw that adjusting the saddles lower would only create buzzing.

As you can see in the chart above, the string height was half again higher than it should have been and relief (neck bow) was at least two to three times higher than optimal.

I removed the truss rod cover hoping the nut wouldn’t be stripped and was happy to see that it was in perfect condition. About two-thirds of a rotation got me under 0.01 inches of relief with a capo at the first fret and manually fretting the last fret.

I used a terrycloth rag soaked in Naptha and most of the stains came off or at least were seriously lightened.

I tried Meguier’s polish on the remaining stains but they were apparently too deep to be easily polished out, so I left them.

After installing new D’Addario strings and setting the string height with the saddle adjustmet screws, my attention moved to the two holes drilled into the body below the bridge.

No idea what they were for, and I realized I’m no “finish” guy and whatever repair I try here will likely look worse than what I started with, but leaving bare wood exposed to our Florida humidity and to potential spilled drinks, sweat, etc., just didn’t seem right so I dove in.

First I glued a piece of toothpick in each hole, then filled the remaining void with wood putty. After two hours, it was time to paint. Ugh, this is where I totally lack skill. Of course I couldn’t come close to matching the color, but even worse – when the paint dried, I tried sanding the areas level with 2000, 2500 and finally 3000 grit sandpaper (wet).

Now I had a messed up area much wider than the two tiny holes I’d started with, and I began to wonder if I’d be having a $50 fire sale!

But Meguiers polish came to the rescue and brought back nearly all the shine I’d started with. Just one caveat – it also removed some of the paint. <Sigh!>

One hole seems to be covered ok, but that’s just the photo. In person, it’s as bad as the hole you see on the left in the above picture. My wife just got back from the store with some nail polish that should come closer to matching the color. (Thank you, Jean! I really hate having to buy nail polish – I get some weird looks!)

Now to intonate and jam! And post it on Craigslist for someone to buy who just wants to play and enjoy a guitar, not worry about what all is wrong and how to fix it. (Might need someone with poor eyesight if I can’t get that color to match!)

How long will this run of super-easy guitars last? I rarely get guitars with so few problems. Let’s cross our fingers as I reach into the rack to grab our next “Craigslist Guitar”!