Ripped Off by On-Line Guitar Stores 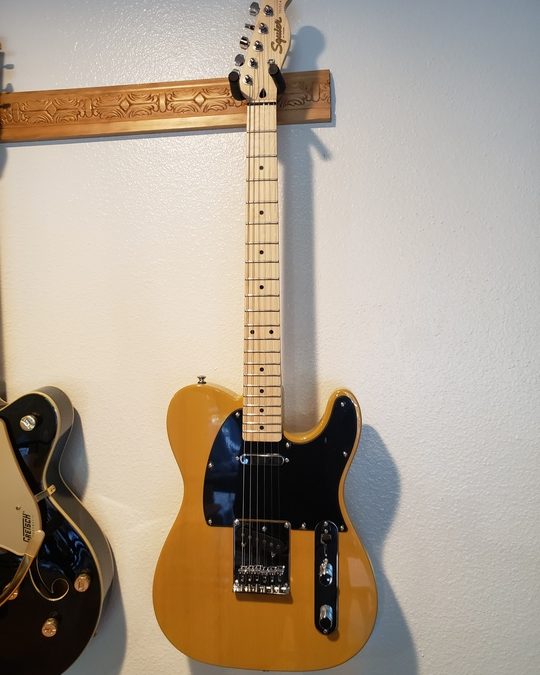 My customer had purchased a “brand-new” Squier Affinity Telecaster a few weeks before. He ordered it from a big-name “reputable” on-line guitar retailer and they shipped it promptly, packaged it properly and he was very happy with the beautiful butterscotch, maple fretboard Telecaster. Until he wasn’t.

Knowing that even new guitars need a professional setup, he brought the guitar to me this morning. I gave it a quick look-over, marveled at how nice it looked, but then I pointed out a problem with one of the nut slots.

It appeared that the low-E had been cut too low (in height, not pitch! LOL) and that instead of a proper nut file, it looked like it may have been cut with something like the sharp edge of a tuna can lid!

“Should I return it?”, he asked. “Well, that’s your safest bet, but some on-line guitar stores might be inclined to reimburse for the nut replacement, saving shipping fees, and we could change this plastic nut for a bone nut.”, I replied.

So, I get the guitar on the bench and as usual, I tune it, check the electronics, then take measurements of nut slots, relief, string height, pickup heights, etc. I was surprised at how bad things were, with this being a new guitar.

When I shined a light into the truss nut cavity, the hex corners were all rounded. It really wasn’t a hex anymore. My 4mm allen wrench turned freely.

It was time to notify the customer. I gave him these options –

He could return the guitar to the on-line store. I could stop now and there would be no charge.

If he wanted me to continue, there would be a minimum $50 charge for extraction that could double if I had to use aggressive methods (i.e.: remove the truss rod).

He chose to have me stop and he plans to return the guitar.

My customer had purchased the guitar from a “reputable” on-line guitar store so it’s almost certain that he’ll get his money back..BUT..will they cover shipping ($40 to $90)? If he didn’t save the box and packing material, that’ll set him back about $20 or more. And what a hassle!

Now here’s the deal – this was NOT a new guitar and they knew it. They (I didn’t want to know the name, just that it was a well-known on-line seller of guitars) knew the guitar had been returned. Yet they didn’t take three minutes to check the guitar out and discover the problems that I found.

Think about that. That’s how much that on-line guitar store cares about their customers – they get a guitar returned and they didn’t take THREE MINUTES to check the guitar out before selling it to my customer!

How can that happen in a reputable, big-name, on-line guitar store? Think about it – just how do they keep those guitar prices so cheap? They’re paying their employees minimum wage or close to it, and probably squeezing them for every ounce of efficiency. So the part-time college kid who probably has a date that evening, a test tomorrow morning and a boss he hates, doesn’t want to deal with inspecting and refurbing a returned guitar that might make him fifteen minutes late getting off work. What to do? Just change packing labels and ship it out to another customer!

Another customer (also today), brought in a Glen Burton Strat, for a setup. He’d recently bought the guitar used from a major on-line guitar store. He asked if it was worth setting up and I told him that any guitar worth playing was worth setting up.

His main problem was a G string that was “dead”.

I looked closely, but didn’t see any obvious problems other than the nut had been crudely cut and would need replacing, but it didn’t look to be the cause of the dead G.

I’d already told him on the phone that it was likely caused by a string ball not seating properly in the tremolo block. But he says he’d changed strings again and everything seemed fine except for the persisting dead G.

I brought out (due to covid, I meet customers in our lanai) a little screwgun and a flashlight; removed the back cover plate and shined the light into the tremolo block. Sure enough, the G ball seemed lower than the others.

The block was so cheaply made, so thin and light-weight that the ball had pulled partially into the hole. It probably seated just fine when he installed the strings, but got pulled into the block as he tightened the string for tuning.

I sell guitars from $99, sometimes a bit less, that have been checked out; have good & level frets; new strings; good nut and professionally setup already! And therefore, I explained, in my “humble opinion” this guitar was not worth spending that much money on. If he couldn’t return it, I’d give him $30 for a trade-in and $70 difference would get him a great Squier, etc. I would then have to do some major upgrading, reworking and setup work on the guitar to make it saleable.

Moral of the story?

Buy a new guitar from a local store so they can’t stick you with a return or at least they can’t stick you with the shipping if you need to return it. And take it somewhere else to be setup. I’m sure the college kid that a big-box store would have to do your setup will mean well, but he may not have the know-how or experience of a professional. And I’m sure your guitar will be one of his top priorities – right below his date tonight; his test tomorrow and having mom do his laundry!

Purchase a used guitar from a local guitar tech who’s willing to stand behind what he sells. I’m not talking about “guitar flippers” – people who buy guitars and turn around and resell them without knowing or sometimes without even caring if they have problems.

Deal with a guitar tech who does repairs and setups. They HAVE to know what they’re doing if they’re working on customers’ guitars. You get to evaluate both the guitar and the seller, in person.

A guitar seems like such a simple instrument. But they are quite deceiving! There’s really a lot going on in the process of making those awesome sounds! Don’t let a bad deal rob you of the joy of playing guitar.

Here’s a link, in case you care to check out the guitars I currently have for sale..