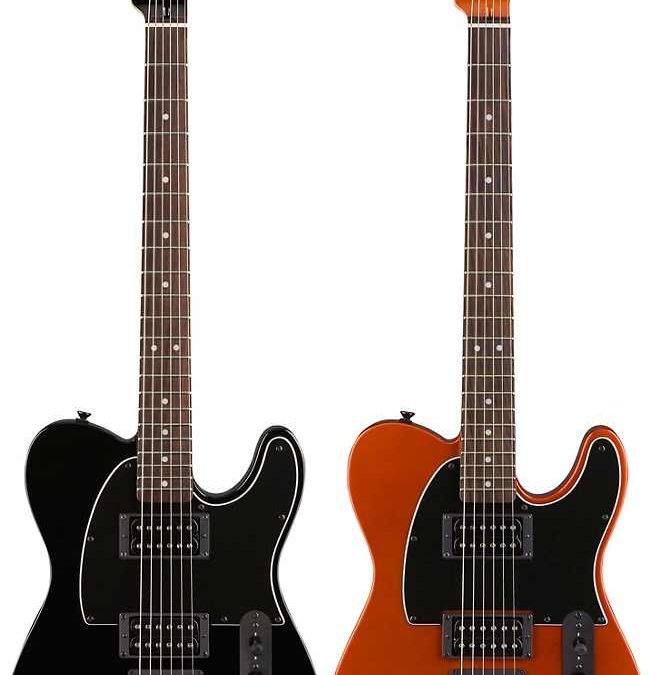 My customer brought me his Squier Affinity Telecaster HH Electric Guitar, Metallic Black, that he’d just purchased a couple of weeks ago for only $179.99, wanting it properly setup. Every new guitar should get an immediate setup. But this one surprised me a bit in what it did and did not need.

If you’re in the market for an inexpensive, new guitar – and with its hardtail bridge, two humbuckers and simplicity, this would make a great beginner model – better read this first!

You can still get this deal from MusiciansFriend.com, Guitar Center, etc. The guitar is stunningly beautiful, especially at this price point! With its thinner body, it doesn’t have the heft of a Mexican or American made Fender Telecaster, which can be a good thing.

I started by checking the neck relief – right on the money at 0.010 inches!, and nut slot heights, which were perfectly set to 0.020″ for each string!. So far, we’re already ahead of most guitars, including other Fenders at a much higher price range.

String heights mostly weren’t bad except for ‘A’ which was sitting at 0.080″ instead of a preferred 0.065″ (Yeah, I know that Dan Erlewine says 0.064, but I’ll bet his eyes can’t discern one thousands of an inch between string bottom and fret top any better than mine can, so let’s round to a more doable 0.065!)

So, I’m starting off very impressed! But as I adjusted the A string saddle, I noticed that all saddles were near the end of their adjustable limits because of the neck angle. If things change in the wrong direction, over time, this guitar is going to need a neck shim.

Another thing I noticed was that the bridge moved! Yikes! Part of my setup process is to check all neck screws, tuner key screws and nuts, strap button screws and bridge screws. All five bridge screws and the bottom strap button would not tighten. They’d just spin with hardly any tension at all when I turned the screwdriver.

So I removed all those screws and filled the holes with specialized hardwood dowels, (the technical term is “toothpicks”!) and Titebond wood glue. I was then able to snug the screws in nicely. Note in the photo, I’ve added a small strip of foil under the bridge ground. This is to ensure a good connection even when, after time, the wire is driven deeper into the soft wood.

I almost always find that the 10mm nuts holding tuner keys in place, need tightening and this was no exception. Without strings, I could easily turn some of the tuner keys! They should have had positioning pins to prevent this. I didn’t bother to pull one to check, but I’m having some doubts.

While I’m talking about the tuner keys, nobody expects Grovers on a sub-two-hundred dollar guitar, but these keys felt really cheap. I have some cheap Chinese keys I buy from a trusted vendor in China, to use as replacement keys on cheap guitars and I was surprised at the nice, smooth, solid feel they had. Surely Squier could use better keys like those, even if they had to charge five bucks more.

These tuner keys may make tuning a bit trickier, but I don’t think they’ll affect tuning stability. Any 14:1 or better ratio, should be able to keep a stable tuning.

The fretboard has some obvious blemishes, but even worse is that the frets – especially the first eight frets – are already showing fret wear! Now, kudos to my customer for practicing that much in just a couple of weeks, but even so, fret material should be tougher than that.

At this rate, I figure the guitar will need a level and crown within six months, certainly within a year. I can see a full refret being needed within five years or less. But a refret would likely cost as much as or at least close to the initial purchase price. And you wouldn’t want to just replace the neck and lose that beautiful headstock!

The good news is that each and every fret was level from E to shining e! This is typical of Squier. They usually do a very good job of ensuring you get level frets. Even one high fret can drive players crazy trying to run down the source of the buzz!

Intonation was off a mile! If you’re not familiar with the term, “intonation” is the ability to play the right notes and chords after tuning the open strings. You set intonation by changing the length of each string until it gives the proper notes at each fret (or within a few “cents” of the right note). Nut slot heights, fret heights, finger pressure and some other aspects also affect intonation.

(I’ll add more here, including how it plays and sounds, once I get the new strings on and try it out on a good amp.. by tomorrow for sure!)

So, would I recommend this guitar? I honestly thought I’d be enthusiastically recommending this Squier Telecaster, until I got it apart and started seeing some serious issues.

Honestly, most cheap guitars have rather soft frets, but I’ve never noticed such rapid fret wear before. And it isn’t uncommon for a guitar to have loose bridge screws, but all of them??? I mean, I’ve heard of “movable bridges”, but this was absurd!

I think these were made for the average beginner – the one who’s “going to learn guitar”, gives it a go for a few weeks, then hangs it on the wall until it gets posted on Craigslist. I suppose it’s perfect for that person.